Local architecture studio Squire & Partners has created an elongated, black community centre in a park alongside the Brixton Windmill in London.

Named the Brixton Windmill Centre, the building stands in the small Windmill Gardens park in south London next to the city's last working windmill.

Squire & Partners designed the building to complement the 200-year-old, Grade II*-listed windmill, which is still used to produce flour.

"It was always an object building by the very nature of its function," he told Dezeen. "But what was strange to us is putting any buildings back into parkland is slightly against policy. However, this park exists because of the windmill."

The architecture studio designed the long, single-storey building so that it doesn't compete with the tar-sealed windmill and as a nod towards the previous buildings that surrounded the mill.

As some of these buildings were only knocked down in the 1960s, their previous locations were known to the studio and played a part in winning planning permission to build the centre in a park.

"What was clear to us was that all the supporting buildings of the windmill from its original days were missing. It had the miller's housing and stores, it never operated just as that building," said Gledstone.

"We knew where the historical buildings were sited and knew from a listed-building point of view that we could argue that we were complementing the setting of this listed building with the right kind of architecture."

Both the 154-square-metre education and community centre's colour and its materials make reference to the 19th-century windmill.

The building has a Douglas fir frame with the two end gable walls made from soot-washed bricks and black weatherboard used for the longer facades.

"This is the right kind of architecture for here, it very much complements the windmill with its robust materiality," said Gledstone.

"It was designed to survive the test of time with its durability, but also be robust. It can be completely locked up at night, is secure and needs almost zero maintenance," he continued.

"Each material is true to itself and performs extremely high to itself. There are no layers of maintenance added to them. But they resonate in harmony with the windmill itself."

Squire & Partners designed a series of cupboards on rollers than can be used for storage and to divide up the space that will be used by school and community groups as well as a visitor centre. 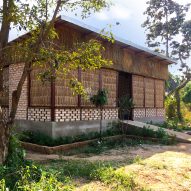 Enclosed rooms are located at each end of central space with a kitchen and office space for the charity that runs the windmill – Friends of Windmill Gardens – at one end, and a grain store, cycle parking and toilets at the other.

"It's a series of rooms that can come together, they can act as one or they can break down into a series of classrooms and work for every single generation," said Gledstone.

Construction of the community centre was funded by Lambeth Council as the charity had outgrown a shared building in the park and needed a dedicated space for events and to help fund the upkeep of the windmill.

"The lottery funds got it quite a long way when they got it fully refurbished, but it needs an ongoing programme to help it keep going in terms of funding its upkeep."

Squire & Partners, which is based nearby, carried out the planning application pro bono, to allow the project to gain funding from the local council.

"They said – 'look, we've got a chicken and egg problem. The funding has been put aside, but the funding won't be released until it's got planning, but planning can't happen as no one can afford to pay for it' – so at that stage we volunteered to donate our time to help get the application done," added Gledstone.