Adidas, Stella McCartney, Lululemon and Gucci's parent company Kering have teamed up to invest in a novel material called Mylo, which is grown from mycelium but rivals the look and feel of animal leather.

As part of a newly established business consortium, the brands have each agreed to spend seven-figure sums to help level up the production capabilities of Mylo's inventor, US biotechnology company Bolt Threads.

The plan is to create a supply chain for the vegan leather, which would allow it to be manufactured at a commercially viable scale.

"What we are trying to do with Mylo is scaling it beyond where biomaterials have been – relegated to one-offs or museum pieces – and instead making it a material that millions and tens of millions of people can wear every day," Bolt Threads vice president of product development Jamie Bainbridge told Dezeen.

According to Bainbridge, the consortium represents the largest joint development agreement to-date that is aimed at introducing a biomaterial to the mass market.

After a number of brands and even entire fashion weeks have gone fur-free in recent years, vegan leather could be the next step. As an animal byproduct, it doesn't just emit greenhouse gases and consume finite natural resources through the rearing of livestock, it also causes environmental pollution through the tanning and dying process.

In return for their investment, the four brands in the Mylo consortium will have exclusive rights to use Bolt Thread's mycelium-based alternative, with the first products expected to hit shelves in 2021.

The hope is that this initial investment will eventually allow Mylo to be produced at a similar speed and efficiency as other mass-market materials, in order to make it affordable even for smaller companies. 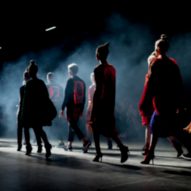 "In our current stage, we are dependent on large brands to help subsidise the massive costs it takes to figure out how to make Mylo at a commercial scale," said Bainbridge.

"These companies are enabling us to develop a process that will eventually produce a high-quality leather alternative at a comparable price to leather hide but that's going to take a few years."

The consortium is made up of a strategic mix of luxury and sportswear brands, in a bid to showcase that a novel, bio-based material can live up to the high aesthetic and performance standards that are inherent in these industries.

According to Bolt Threads, Mylo can replicate the look and feel of real leather across a range of colours and textures and can be made into everything from shoes to bags and jackets.

The material's core ingredient is mycelium, the thread-structure that mushrooms and other fungi use to grow, much like the roots of a tree.

These mycelium cells are fed with sawdust and other organic material and placed on square growing mats. In a humidity- and temperature-controlled environment, they are allowed to grow into a foamy layer – "imagine a big bag of smashed marshmallows" – and finally harvested.

Through further processing, this mycelium network is turned into a sheet of material that resembles cork but is much thinner and more flexible, which is then tanned and dyed by the same tanneries that work with animal leathers.

These processes normally involve harmful chemicals such as chromium, which can lead to wastewater pollution and knock-on health effects for workers. Bainbridge claims Bolt Threads only work with companies that have been awarded global sustainability certifications.

"Mylo is free of highly hazardous chemicals and substances such as DMF (dimethylformamide) and chromium, some of the most noxious chemicals used in animal and synthetic leather," he said.

Compared to animal leather, the company claims that the process of producing the material emits fewer greenhouse gases while consuming less water and natural resources than are involved in the rearing of livestock.

Unlike synthetic leather alternatives, it also does not use any petroleum-based plastics such as polyurethane or PVC, which emit carbon as they are produced and will take hundreds of years to break down in landfills. 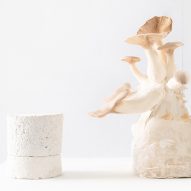 Bainbridge said an independent lifecycle analysis of the material will be undertaken in 2021.

This means that at the moment, there is no publicly available data to verify how much carbon is emitted and how many resources consumed during the process of making Mylo and how the material will impact the environment when it is ultimately disposed of.

Longtime Bolt Threads collaborator Stella McCartney has created a special edition of her iconic, chain-trim Falabella bag from the material. Although never made commercially available, the one-off piece was put on display as part of the V&A's Fashioned from Nature exhibition in 2018.

The designer was also involved in the development of another one of Bolt Threads' materials, lab-grown spider silk used to create a biodegradable tennis dress in collaboration with Adidas.