A house designed by David Adjaye as part of the Make It Right Foundation's contribution to rebuilding New Orleans after Hurricane Katrina is reportedly "in imminent danger of collapse" and is set to be demolished.

Designed as one of 109 houses that were built by non-profit developer Make It Right Foundation, which was set up by actor Brad Pitt to rehouse people, the home was issued with a Notice of Emergency Demolition on the 30 September.

Local news website Nola.com reported that the notice, which was posted on the property at 1826 Reynes Street, states that the house is "in imminent danger of collapse and/or threat to life" and will shortly be demolished.

The demolition will cost $7,085 and will be paid for by the building's owner, the notice says. The date of the demolition is not yet known.

The Adjaye-designed house was built in the city's Lower 9th Ward, which was largely destroyed by the flooding caused by Hurricane Katrina in 2005.

The home was purchased by Kamaria Allen in 2011, who said she almost immediately noticed problems.

According to a 2018 interview in NBC, she found mushrooms growing from her bedroom walls and kitchen, mouldy carpets and rotting wood within the first year of owning the property.

Following attempts to resolve the issues with damp, Allen sold the home back to the Make It Right Foundation in 2012. It has remained empty since this time. Photos on Nola.com show the boarded-up home with broken roof supports and missing cladding panels.

Numerous high-profile architects including Frank Gehry, David Adjaye and Shigeru Ban designed homes for the development. Each timber home was constructed for around $150,000. In total, 109 homes were completed at a reported cost of $26.8 million.

However, according to multiple news sources, issues were quickly found with some homes and the Make It Right Foundation began replacing decks in 2008 due to rot. 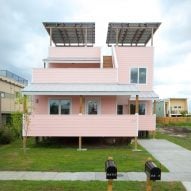 "Essentially, Make It Right was making a lot of promises to come back and fix the homes that they initially sold these people and have failed to do so," Austin told New Orleans news station WWL-TV at the time.

The Make It Right Foundation has itself started several lawsuits that aimed at determining the reason for the home's issues.

The lawsuit accused the architect of defective design work that led to damages that will require $20 million to repair.

At the time, Williams responded to the lawsuit, which has yet to be resolved, with a letter that stated: "To now be confronted with this baseless lawsuit is shocking and insulting and we intend to prove that we were not at fault."

The Make It Right Foundation also sued lumber supplier TimberSIL for $500,000 in 2015, alleging that defective treated timber used to build the homes led to the rotting. This case is also unresolved.

Other homes designed for the project include Duplex by Frank Gehry, a "floating house" by American studio Morphosis and an elevated home by Atelier Hitoshi Abe.