Located in the old village of Wangjiangjing in the Zhejiang province, the art gallery was developed as a landmark for the area while demonstrating how new life can be given to old buildings.

Roarc Renew's design celebrates the architecture of the brick granaries, which were built in the 1950s to store grains, and enlivens them with two complementary corridors that are lined with arches and curve up towards the sky.

"So we want to protect this memory in an architectural way, rather than destroying everything," the studio explained. "There are less and less ancient brick buildings in China now. We should learn and protect more."

TaoCang Art Centre encompasses 2,448 square meters, with the two granaries functioning as its main exhibition spaces. One will be used as a commercial gallery, and the other as an art gallery.

The external brick corridors that Roarc Renew has added contain the art centre's auxiliary and circulation spaces, ensuring that significant internal changes were not required to the granaries.

"Acting as the accompanying space for an art museum, the corridors allow for extending exhibition space externally in a way to protect the internal," the studio explained.

"Through all these architectural efforts, we are paying our tribute and respect to the history of the old granaries."

These concrete arches have been left exposed inside and painted white to form a backdrop to the artwork. 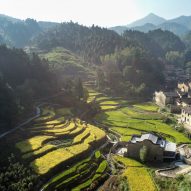 Bookshop in paddy field sandwiched between walls of abandoned house

The other only changes that Roarc Renew made to the granaries is the addition of large revolving semi-circular doors at either end and paintings of lotus flowers on the floors. These murals pay homage to the village's lotus-flower industry and pond adjacent to the site.

TaoCang Art Center's corridors are lined with curved brick arches and run in parallel to the old granaries, before winding into the gap between them and curving up towards the sky.

This design was developed by Roarc Renew to create a dramatic "monument-like" structure that also complemented and echoed the design of the granaries.

At the point where the corridors meet and sweep upwards, the walls are adorned with a giant image of two wheat ears, made from a pattern of projecting bricks.

This motif was included as a reference to the building's past and also marks the main entrance point for visitors to TaoCang Art Centre.

In the future, the TaoCang Art Center's corridors will be developed to contain more facilities such as restaurants, coffee shops and souvenir shops to support the operation of the facility.

According to Roarc Renew, this will be achieved by inserting full-height glass into the openings of the corridors to transform them into indoor spaces.

Other recent adaptive reuse projects in China include Atelier XÜK's conversion of a disused Chinese primary school into a boutique hotel, and Arch Studio's transformation of an abandoned hutong in Beijing to make a house with curving glass walls.

In a paddy field in the rural outskirts of Xiadi Village, Trace Architecture Office created a bookshop and cafe from the old rammed earth gables of an abandoned house.