Originally the hutong was a style of courtyard residence known as a siheyuan.

The project is called Qishe Courtyard for the seven original structures - qishe translates as seven houses - that stood on the site.

These seven basic wooden structures were intact, but their roofs, walls and windows had fallen into disrepair.

When Arch Studio took on the project the courtyards of the home were filled with temporary structures and waste materials.

Rather than simply restoring the original design, the architects preserved the original materials but improved the circulation to unite the disparate spaces in a single, large home.

"We embedded a veranda – a basic element of traditional Chinese architecture –  into the old siheyuan to link up the seven separate pitched-roof houses," said the practice.

"The veranda functions as a circulation route, reshapes the spatial pattern and layers and provides a playful walking experience as well as fantastic views."

The facade and entrance has been largely retained and rebuilt using the original grey bricks.

Inside it has been opened to create a garage space that sits in front of the home's original gate.

Along the eastern edge of this entrance, a glimpse of the contemporary additions can be seen through section of wall formed from the roof sweeping down to the ground.

This middle courtyard space, arch-shaped in plan, is surround by glazing.

A tea room, dining room and living room surround this central courtyard, which is sheltered by a wooden roof with exposed beams.

"The dining room has a sliding door, which can open the interior to the outside space completely and extend indoor activities to the courtyard as well," said the practice.

Another courtyard at the back is surrounded by the more private areas of the home.

Two bedrooms, a study and a smaller tea room face this courtyard with the curving glazed walls of the veranda, which undulates to accommodate three existing trees.

The bedroom block is given privacy by a slatted wooden screen.

Laminated bamboo was used for the new elements, including doors and window frames, to complement the existing pine structure. 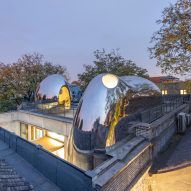 The roofs of Qishe Courtyard's old buildings had to be re-built for waterproofing and insulation, then re-clad with their original grey tiles.

In contrast, the roof of the new areas are finished with grey polymer mortar.

Waste wood found left in the courtyards of the original buildings was used to create new furniture.

Salvaged items such as a millstone were turned into flowerpots and ornaments.

Many of Arch Studio's previous projects have worked with courtyard typologies.

Recently the practice used a similar approach of uniting several abandoned structures in Beijing with a rooftop walkway to create a series of courtyards and workspaces.