Nicolas Pople Architects has created a facetted cross-laminated timber chapel for a church in the town of Stroud in southwest England.

Built for the Christian Community in Stroud, the timber chapel was made from a combination of cross-laminated timber (CLT) panels and glue-laminated (glulam) structural beams.

Nicolas Pople Architects worked with structural engineer Corbett Tasker to create the facetted CLT structure, which was designed to invoke the feeling of a contemporary gothic cathedral.

"We wanted to create a contemporary, well-crafted sacred space, inspired by the great medieval gothic cathedral and church builders in a way which isn't noticeably of a particular style or religious group," explained Peter Corbett, co-founder of Corbett Tasker.

"It's a space where the structure is honestly expressed without being visually distracting. In the words of Aaron Mirkin – priest at the Stroud chapel – it is 'uplifting but not overwhelming'," he told Dezeen.

Within the main chapel, the walls and roof are made from angled slabs of exposed structural CLT. 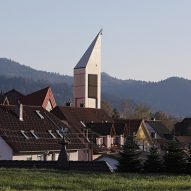 The architecture studio wanted to create a space with interesting geometries, but one that had clean lines and did not distract from the Christian Community services that take place.

"The space should not be the focus of attention: the ritual is what matters," said Nicolas Pople Architects founder Nicolas Pople.

"From a design point of view this requires a balancing act between static and dynamic, and careful attention to detail so that paradoxically, it does not draw the eye."

The design team chose to build the structure from CLT as it allowed them to reinterpret the stone, curved vaults of gothic cathedrals in a contemporary way with a sustainable material.

"Fundamentally CLT allowed the design team to create a beautifully crafted space using complex geometry whilst significantly de-risking the construction phase – it is not feasible to build cathedrals like the gothic masons did!" said Corbett.

"There are also strong ethical reasons for choosing to build in timber, the only truly sustainable material and the natural choice for a forward-thinking church community." 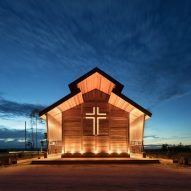 Oikumene Church in Indonesia made entirely from wood

The architecture studio and engineer aimed to push the possibilities of CLT construction and created a facetted timber vault from CLT, which was supported by glulam beams.

"Very often CLT structures are built with horizontal slabs supported on vertical walls, or a grid of orthogonal beams and columns," explained Corbett.

"Here, in perhaps a first in this country, we used the panels to create a timber vault, where compression forces dominate over bending forces, creating an 18-metre spanning arch from altar to congregation and using a 'folded plate' technique to give additional structural stiffness."

The chapel was built on the site of the church's former community hall and other facilities, which were demolished, at a 90-degree angle to the previous chapel that has been converted into a community room.

Wrapping around the double-height main hall is a single-storey structure that contains the church's entrance hall, office, cloakroom, toilets, a wake room and the vestry.

The walls of the timber structure are covered in white render, while cedar shingles were used on the chapel's roof and a green roof was installed on the flat roofs of the surrounding rooms.

German studio Architektur3 also used timber for a triangular tower and public viewpoint that was added to a church in the Black Forest, while TSDS Interior Architects built a church entirely from wood on a rubber plantation in Indonesia.

Other recently completed churches on Dezeen include a circular church in Brno that is topped with a panoramic, rainbow-hued window and a porcelain-clad church designed by Espen Surnevik in Norway.

Photography is by Fernando Manoso Borgas.