Architecture studio OODA has designed a cube-shaped office above a green-roof covered museum for the governing body of Portuguese football.

Designed as the headquarters for Liga Portuguesa de Futebol Profissional – the body that manages professional football in Portugal also known as Liga Portugal – the office and museum will be built in Porto.

The headquarters will be divided into two main elements: a single storey building that will be covered in a green roof and a cube-shaped office block.

The long low-level building will contain an auditorium for over 400 people, a football museum and a store selling merchandise from the 36 teams in the top two divisions of Portuguese football will be sold.

Above the single-storey podium will be a seven-storey block that will house the offices of Liga Portugal.

The open-plan office space will be enclosed with glass facades that will be covered in hexagon-shaped cladding and will have several outdoor terraces cut into it.

The Liga Portugal headquarters is set to be built in the Ramalde area of Porto and includes a public square, which is designed as a gathering place for the area.

"It is a project with a strong public character, which will emphasise an area of the city that is sometimes forgotten, through the construction of an institutional building, which is simultaneously a sport, cultural and leisure facility," said João Jesus, partner at OODA. 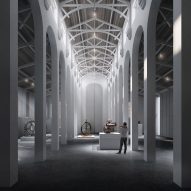 "However, it sought to boost the use of its spaces, exterior and interior, as a three-part interface: the public, the surrounding city and the program it contains," Jesus added.

The architecture studio is also working with Kengo Kuma to transform a disused slaughterhouse in the Campanhã neighbourhood of Porto into a cultural centre. It has also previously completed an apartment renovation behind a tiled facade and an apartment with a hammock over the staircase in the city.

Visualisations are by Fusão, unless stated.