São Paulo's Estudio Flume and architect German Nieva have refurbished and extended the Babassu flour factory in Serra, Brazil to create a better workspace for the quebradeiras who turn babassu nuts into oil and flour.

The 18 quebradeiras that collect and break the nuts by hand to obtain the oil and flour – which comes from the mesocarp, or middle layer, of the babassu nut – needed an improved workspace that would comply with sanitary regulations and have space for better-suited equipment.

Estudio Flume set up a series of workshops with the quebradeiras to understand the flour production and what their expectations were for the workplace.

"Informed by these workshops, our strategy was to create an open plan workspace within the existing building and to add a low cost semi-open extension to improve the workflows between delivery, circulation and manufacture areas," Estudio Flume's founder Noelia Monteiro and Nieva told Dezeen.

"These communities and especially the quebradeiras are doing an admirable job in protecting the rainforest, therefore it was a privilege to have had a chance to help them improve their economic opportunities," the studio added.

The existing building was showing signs of deterioration caused by the hard work required to produce babassu flour.

This influenced the studio's choice of new materials, which were selected based on their durability and resistance to impact.

Estudio Flume removed the existing front and back doors and replaced these with perforated brick walls to create natural cross ventilation.

A new service area was created on one side of the building, built-in timber and covered with a frosted polycarbonate sheet that blocks UV light but lets 70 per cent of daylight in.

The polished concrete floor in this area incorporated some tiles kept from the demolition works. 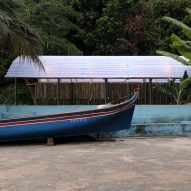 This makes for a durable base for the bespoke water tanks used for cleaning the coconuts, which were designed in collaboration with the workers to fit their heights and working positions.

"The timber was locally sourced and the concrete blocks manufactured close to the site," the studio said.

"We also used standardised products to avoid additional costs and minimising waste," it added. "The sinks were made using prefabricated concrete pavement setts and the ceiling within the manufacturing area done with plywood."

Estudio Flume also added a new covered access and breakout area at the front of the building that features a planter and a bench made with concrete pavers, and acts as a meeting point between the quebradeiras and the community.

The refurbishment also included a new ceiling attached to the existing timber roof structure, as well as a new skylight to create more natural light in the workspace.

Though budget was limited, the studio aimed to make the project as sustainable as possible.

Estudio Flume also used a translucent sheet and wood for its design for a fisherman's kiosk on Brazil's Jaguanum Island.

Other recent projects in Brazil include MF+ Arquitetos' Cobogós House, which is configured as a series of blocks, and Arquipélago Arquitetos' rammed-earth House in Cunha.