Dutch designer Richard Hutten worked with Lensvelt to create 27,000 new seats for Amsterdam's Schiphol airport that make use of the building's existing resources.

But according to Hutten, this "radical new way to produce a product" emits 95 per cent less carbon in its production than any comparable product. The designer followed circular design principles, with all of the seats' constituent materials being either recycled, recyclable or biodegradable.

This starts with the frame, which is cast from aluminium that was recovered from the airport's previous, unserviceable seats that would otherwise have been discarded.

Through this process, the design is able to conserve not just resources but also energy. That's because recycling aluminium requires only a fraction of the power needed to produce the virgin material.

Unlike other elements like gold, aluminium is not mined in its pure form but needs to be extracted from rocks such as bauxite, which are high in aluminium oxide.

"It takes 15 kilowatt-hours of electricity to produce one kilogram of aluminium," Hutten told Dezeen.

"For reference, an average household uses 7.5 kilowatt-hours per day. That is really a lot of energy. You only need around 10 per cent of this amount of energy to recycle aluminium, since you don't have to make the material, you just have to melt it."

"Using recyclable materials is not enough," he continued. "Products should also be judged based on the energy that is needed in their whole lifecycle, from mining the materials all the way to the end of their life."

The Blink system also cuts out all plastic – which Hutten previously described as "the cancer of our planet" because it emits carbon through its production and cannot generally be endlessly recycled.

So rather than using a powder coating, which is made using polyester or polyurethane, the frame was simply polished to a shiny, chrome-like finish.

Meanwhile, the upholstery is made from E-Leather, a recycled leather entirely made from industry offcuts that have been diverted from landfill.

This composite is bonded using water pressure rather than chemicals, with 95 per cent of the water recycled for future reuse.

Underneath, the seat has a wooden core that is padded out using a mixture of coconut fibre and natural latex, which is derived from the sap of the rubber tree.

"I was looking for an alternative to the plastic foam, which is the sole material used in upholstered furniture nowadays, and I found a company that is experimenting with alternatives using all kinds of natural fibres in combination with latex," said Hutten.

"Before plastic took over, these were the materials used in upholstered furniture. As a result, the seat is biodegradable and much more comfortable and longer-lasting." 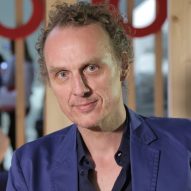 The entire system is designed to be durable and easily repaired, with most elements requiring only one screw to change.

Hutten has also designed a special support that can be fitted onto Blink's horizontal supporting beam to integrate the roughly 1,000 old Schiphol seats that are still useable, rather than letting them go to waste.

No glue is used to hold the seating together, meaning that all the pieces can easily be disassembled and recycled, reused or placed in an industrial composter.

The system is manufactured by Lensvelt within 60 miles of the airport to mitigate the carbon emissions associated with transport. But according to Hutten, the real environmental impact of the project stems from the fact that Blink is entirely mass-produced.

"I see a lot of really nice experiments with new sustainable, biodegradable and recycled materials. These are very inspirational, but when they don't get implemented and stay in the studio of the designer, the benefit for the planet is next to nothing," he explained.

"Industrial production worldwide is responsible for 40 to 45 per cent of all carbon emissions. Industry pollutes six times more than aviation. So if global industry manages to reduce its negative impact on the planet by 95 per cent, as I did with Blink, it can make a real difference.

"Blink still has a negative impact on the planet. This is due to the fact that the transition from fossil fuel to renewable energy has not yet been completed," he continued.

"But on every aspect, Blink proves that with relatively a little effort and not a substantially higher cost, you can make a big difference. Only producing nothing would be better for the planet."

Through utilising this production system, Hutten and Lensvelt hope to help Schiphol work towards its mission to become a zero-waste airport by 2030.

Blink is nominated for this year's Dezeen Award in the sustainable design category alongside designer Elissa Brunato's iridescent sequins made from cellulose and the refillable cleaning product system Spruce.