South African designer Porky Hefer imagined how polluted oceans might force marine animals to mutate when designing his five fantastical creatures, including a giant octopus made from hand-felted cigarette butts.

His sea creatures will be on show at the upcoming NGV Triennial at the National Gallery of Victoria in Melbourne and were influenced by the National Geographic's Planet or Plastic? issue.

"The cover grabbed me, the article and data shocked me and the images haunted me," Hefer told Dezeen.

"After that, I could just see plastic trash everywhere including in my own home and habits. We use far too many plastics and recycle far too few. When the NGV brief came in I realised it was a great opportunity and platform to amplify the warning signs all around us."

Hefer worked with artisans and craftsmen to make the sea monsters, all of which were handmade, for the exhibition titled Plastocene – Marine Mutants from a Disposable World.

Though Hefer has created marine animals before, these were different as they were speculative rather than based on existing creatures.

"Most of my previous work has been about mimicry and about imitating what is already out there in nature," he said.

"For this project, rather than show what was under threat, I imagined what things would look like if we didn't change our habits and behaviour."

The results include Buttpuss, the aforementioned octopus. At 14 metres wide and 3.6 metres tall, it is Hefer's largest piece to date and clad with hand-rolled karakul wool cigarette butts. Buttpuss weighs 1,256 kilograms and, as with all the sculptures, was made using recycled material.

"The floor covering comes from a shipment of silk carpets that got water damaged on the journey and were unsaleable," Hefer said. "This and the carpet inside Q-Tip were kindly donated by a local store, Mae Rugs."

Q-Tip is modelled on a by a hammerhead shark and features a gigantic cotton bud and an interior clad in pompoms made from off-cut T-shirt material.

Hefer used a wide variety of materials for the designs, including plastic bags and things that would have otherwise been thrown away.

"Sabre-Toothed Netfeesh is woven with off-cuts of rope I got from a rope manufacturer," he said. "The beginning and end parts of the rope are not the right tension so are discarded and sold as scrap. The colours would change continuously so I had to adapt the design often."

His work draws on the idea that the Anthropocene, the name given to our current era to describe humans as the defining force, could lead to the Plastocene era.

"Plastics are filling the oceans and heavy pollutants are changing the pH of our seas," Hefer said. "While thousands of species die off, unable to adapt to the rapid changes in their environments, others begin to transmutate."

"Here, we see the earliest indications of the Plastocene, a new era defined by organismal adaptation to the endless abundance of plastics and pollutants accumulating in our environment." 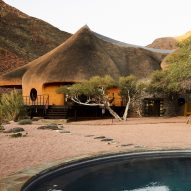 The Nest at Sossus guesthouse in Namibia features a thatched facade

"The future painted here is one that humans would struggle to inhabit, but at best, we can hope that life continues in this new form, following the mass extinction that we so selfishly perpetuated," he said.

The NGV has commissioned 30 new works for the NGV Triennial, featuring 87 projects by more than 100 artists, designers and collectives from 33 countries.

Photography is courtesy of Porky Hefer and Southern Guild. Buttpuss, Flat White and Q-Tip were commissioned by the National Gallery of Victoria, Melbourne.

Plastocene is on view at NGV International in Melbourne from 19 December 2020 to 18 April 2021. See Dezeen Events Guide for an up-to-date list of architecture and design events taking place around the world.