Rafael Viñoly Architects has unveiled the first renderings of a museum dedicated to US Armed Forces Medal of Honor recipients in Arlington, Texas.

Named the National Medal of Honor Museum, the memorial building will be built alongside a lake near the Texas Rangers baseball stadium and Cowboys football stadium in Arlington.

The museum will be dedicated to the 3,500 recipients of the USA's highest military award for valour in combat – the Medal of Honor.

Its main galleries for permanent, interactive and temporary exhibitions will be located in a 25,000-square-foot block raised on stilts and accessed by two large, spiralling staircases.

This form was created after studio founder, Uruguayan architect Rafael Viñoly, strained himself lifting a slab of metal in the studio. According to Rafael Viñoly Architects lifting the weight made him recall the burdens faced by the armed forces. 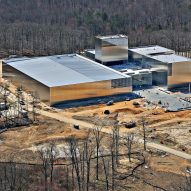 The exhibition block will be positioned above an open amphitheatre that will be used as an events space.

"As someone who wasn't born in America, but chose it as my home more than 35 years ago, it is the privilege of a lifetime to have the opportunity to design and build America’s next national treasure in Arlington – the American Dream City," said Viñoly.

"This museum will proudly celebrate the service and sacrifice of the most courageous members of a great American institution – our armed services,"  he continued.

"I am humbled to play a part in inspiring current and future generations of Americans by recognising these exceptional patriots and designing a building which will boldly demonstrate their deep love of country, of devotion to others, and unity."

The museum is set to be built in Arlington after plans for a five-pointed structure designed by Moshe Safdie for a site in South Carolina were abandoned.

A stainless-steel clad museum dedicated to the United States Army designed by SOM is nearing completion in Virginia.

The firm is also designing a high-end residential building as part of a trio of luxury towers planned for New York and a residential skyscraper for Chicago.