Architecture photography studio Hufton + Crow has captured the chimney of Amager Bakke, a waste-to-energy power station covered by a ski slope designed by BIG, rising from the mist.

Designed in collaboration with SLA Architects, the energy station is topped by the dry ski slope of the Copenhill mountain activity centre.

These new photos show the landscaping around the winding ski slope has bedded in, so the whole sloping side of the power station looks like a bright green hillock.

Starting at a height of 90 metres, the 400-metre long slope serviced by a lift makes a 180-degree turn as it twists down to ground level.

Trees planted on the slope act as windbreaks and shade for hikers, who can follow walking trails up the slope. 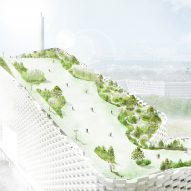 Along with outdoor pursuits, the plan is for the green roof to add biodiversity to the industrial area it sits in by attracting bees and butterflies. Visitors will be encouraged to contribute by planting seed bombs.

Part of the activity centre features a climbing wall up one of the power station's vertical faces.

Hufton + Crow's photographs show the vertiginous climbing wall is covered in a rainbow of colourful holds and bevelled surfaces to create challenging ascents.

The top of the slope is crowned by a viewpoint, an attraction where visitors can look out over the city and enjoy panoramic views.

Built as a replacement for Copenhagen's ageing Amagerforbraending facility, the power station generates power by burning the city's waste.

Photos taken by Hufton + Crow show giant industrial claws hovering above a mountain of rubbish that arrives in bin lorries and is tipped or shovelled straight into the power plant.

As a waste-to-energy facility, Amager Bakke helps Denmark reduce its reliance on fossil fuels and provides a greener alternative to landfill. The plant is expected to process some 400,000 tonnes of waste a year and heat 140,000 households.

In 2015 BIG founder Bjarke Ingels launched a fundraising campaign on Kickstarter to raise money to install technology in the chimney that would allow it to blow smoke rings from steam.

The original plan was for the chimney to emit a puff of steam for every ton of CO2 burned on Earth, to make a statement about climate change.