Invisible Studio founder Piers Taylor has carried out an extensive retrofit of Moonshine – his own off-grid home near Bath in southwest England.

Taylor remodelled Moonshine, which was named by UK architecture magazine Architects' Journal as Small Project of the year when it completed, to make it a more sustainable home.

"I wanted to banish the demons of my youth and move on from the house that I had designed as a young architect," said Taylor.

"In the intervening years, I have learnt so much, while technologies and materials have improved," he continued.

"We have loved living in Moonshine over the last two decades but it needed an overhaul and there’s something very enjoyable about being able to tinker with your surroundings to improve them, which I suppose is what we’ve been doing across the whole site."

Moonshine was originally built in 2002 as a conversion of a crenellated schoolhouse for a large country house into a home for the architect. Taylor renovated the 18th-century building and added a timber extension, with all the material carried along a half a mile path to the site as at the time the house had no vehicle access.

"I wanted to make the house as super-insulated and energy-efficient as possible, by upgrading all the external fabric to Passivhaus standards," Taylor told Dezeen.

"Originally, 20 years ago, my thinking was ventilation and passive solar and now it was airtightness, superinsulation and controlling the west sun to avoid overheating."

Extra layers of insulation were added to the walls, while several of the home's larger windows were infilled with plywood.

All of the remaining windows and screens were replaced with high-performance glass and externally the building was clad in black corrugated steel, as was the roof.

Within the house, the majority of the internal finishes were retained to avoid disruption for Taylor and his family. 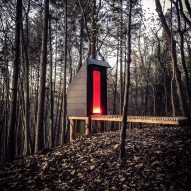 "Glass technology has moved on enormously in 20 years and as we wanted to reduce the area of closing to the north and west it made sense to replace all glazing," he continued.

"We also retained the oak frame and also over clad the kitchen with new stainless steel tops as they had to be raised up to deal with the new floor heights because of new insulation."

Taylor believes that he has improved the home by removing the parts of the initial project that did not work while retaining its core identity.

"For me, the delight of banishing my younger self by removing elements that didn't work outweighed any worries about losing elements, and buildings are always developing, adapting and changing," he said.

"I think the project shows the contradictions we all wrestle with and attempt to reconcile."

The project also reflects how Taylor's views towards architecture have developed from one of his earliest projects.

"Weirdly I wanted less now," he said. "I spend much of my working life agonising over the tiniest details that I hardly wanted to notice any architecture at home and wanted the building to disappear, both into the landscape and also to be the background.

"It was also done on a budget, and when on a budget, you need to be ruthless about only doing so much," he continued.

Moonshine is situated in a forest near Bath. The off-grid home has a biomass boiler fed from waste timber from the surrounding woodland for heating and hot water as well as photovoltaic panels on the roof for electricity.

Since Taylor completed the original home he has built several additional structures within the surrounding woodland.

These buildings include a workshop on stilts for Invisible Studio that was built from reclaimed materials and timber from the surrounding woods, a fibreglass model-making shed and a long-drop composting toilet.

Photography and video by Jim Stephenson.