The modular collection, which won the public vote for lighting design of the year in Dezeen Awards 2020, is designed to be simple and universal rather than conceptual.

The team was informed by the Cartesian coordinate system – which uses an x-axis, y-axis and z-axis to specify a location in three-dimensional space – when creating the eponymous design.

"Every designer, every day uses XYZ, it's fundamental to how we communicate dimension and form," designer João Fagulha told Dezeen.

"In many ways, it's the language of design. From sketchpad to 3D program, XYZ is how design works."

"This isn't a modern technique, it dates back to the 17th century, and it certainly isn't something new to us – adapting the clean lines of contemporary architecture into our work is something we have been working on for many years. "

The studio's aim for the light was to break the design down into its purest form.

"The name itself comes from how we always label the parts of our installations to most easily install them," Fagulha said.

To create the minimalist style, Bybeau used a triple-ring magnet that means each XYZ arm can be rotated 360 degrees to create a versatile design. The magnetic connection system is housed in a brass axis hub, while the arms are made from carbon fibre.

"One of the details we are proudest of is that the points where the axes cross are completely seamless as if they're just balanced on top of each other," Fagulha said.

"The secret here is how the tubes are held together – but we'll have to keep that one to ourselves for now!"

The lights are modular and can be used on their own or become a part of a larger installation. Bybeau used carbon fibre stock that was already in production to design the LED lights. 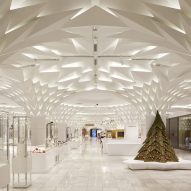 "The only material that could fully realise the elegance of the concept was carbon fibre, which, even though new technologies allow it to be recycled, was problematic from an environmental perspective," Fagulha said.

"However, the minimal design means that the look of XYZ will be future-proofed," the designer added.

"We can also upgrade XYZ with new lighting solutions and technology by engineering a system that allows us to easily slide them in and out without having to change the tubes themselves."

Among the other public vote-winners in the design category of the Dezeen Awards 2020 are Yuting Chang's inside-out Plycelain tableware collection and Suzanne Brewer's "Segway-style" wheelchair that allows users to stay upright.