Taiwanese designer Yuting Chang has created a ceramics collection that wears its traditional blue adornments not on the outside, but layered internally.

The delicate linework, which decorates the otherwise minimal, matte cream tableware, is built up by slip casting porcelain in alternating colours within a mould to create up to 29 layers in one piece.

These become visible where the pieces are trimmed into shape during assembly, revealing a cross section of the layered interior.

In this way, the pattern surfaces only on the very edges of each piece – in the rim of the mug and its saucer, or the handle of the bowl and espresso cup.

In ceramics, slip casting is most commonly used to create the basic shape of a piece, while embellishments are added later with glaze. But this method allows Chang to embed the geometric profile into the very fabric of the tableware.

The collection is called Plycelain in reference to this internally stratified structure, which resembles that of plywood.

"Each layer requires precision and good timing to get right," she told Dezeen. "When liquid slip is poured into a plaster mould, the plaster begins to absorb the liquid and form a layer of the cast on the inside walls."

"The thickness of the cast depends on how long you leave it to form, so I had to carefully measure the time it takes to create the desired thickness." 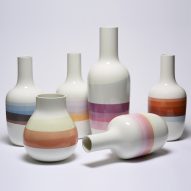 While the main body of each item is cast in a mould as one piece, the handles of the bowls and cups, as well as the feet of the saucers are cut from slip-cast slabs.

The different elements are then assembled together by hand, introducing a craft technique to what is otherwise a mass production process.

"Blue-and-white ware is the most classical and influential type of Chinese porcelain but these days it is largely slip-cast, with the decorative motifs applied by transfer-printing," she explained.

"I wanted to utilise this mass production technique, meant to create large quantities of standardised products, while keeping the authenticity and individuality of the craftsmanship spirit."

Elsewhere, designers have made slip casting their own by using mismatched, discarded moulds from Chinese mass production facilities and reimagining the seams created in the process as decorative elements.