Designed for Sino Land Company Limited and CLP Group, the 175-unit property is located in the historic and lush Kadoorie Hill neighbourhood of Hong Kong. The area dates back to the 1930s when the area was purchased by the Kadoorie family which runs the global Peninsula Hotels chain.

Called St. George's Mansions, the new building is named after apartments built on the site as part of the development of the neighbourhood in the 1940s. RAMSA aimed to reference this history while also bringing in contemporary touches.

"During the process, we drew reference from the past, stepping back to move forward and really understand what other architects have done before us, so we can speak the same language, reinterpreting architectural elements from the past in ways that give continuity," said RAMSA partner Grant Marani.

"We've created a new take on these ideas to create a 21st-century building," Marani added. "The result is a trio of buildings that brings Kadoorie Hill's past into the modern-day."

RAMSA aimed to draw similarities to the surrounding buildings through the material used for St. George's Mansions' three towers

The facade facing Kadoorie Avenue is clad in biege limestone handpicked from Portugal – chosen by the firm to blend with the off-white cement of surrounding buildings. Windows with aluminium frames puncture the stonework. 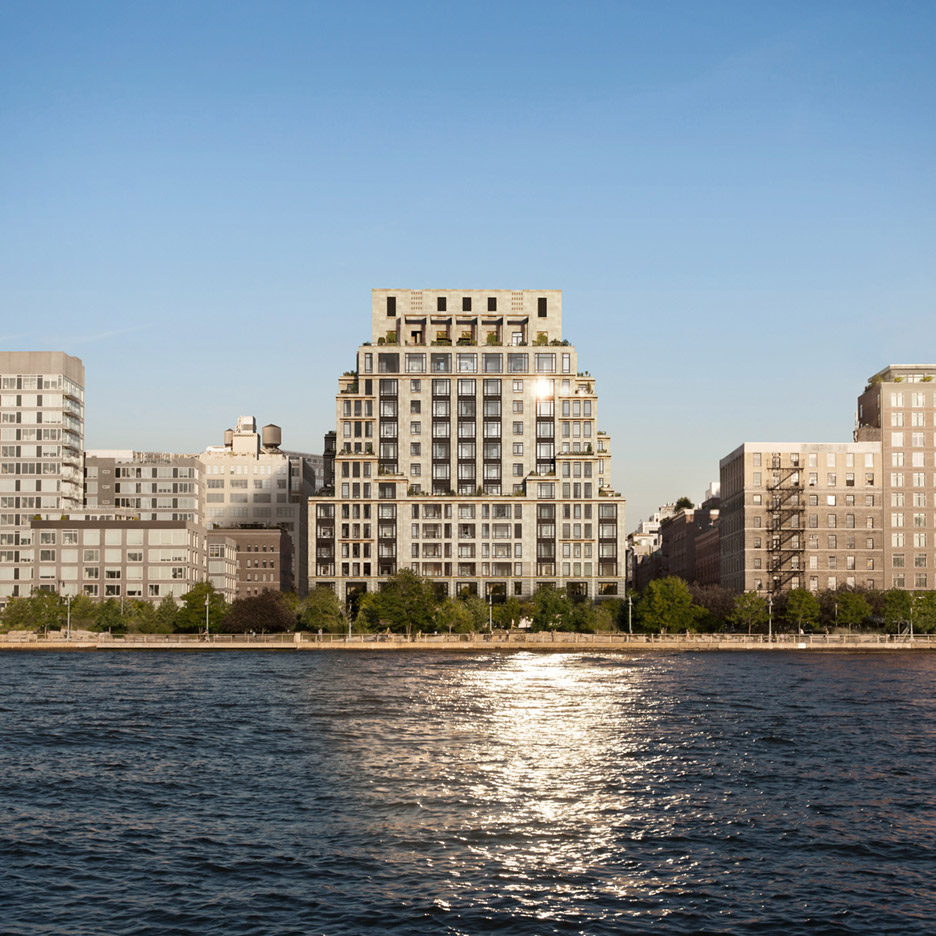 Each tower is fronted by a vertical band of glazed balconies, accessed from the residences by glass doors. Stone coverings over each outdoor area provide shade while also drawing on the hooded windows of houses in the area.

"Over many of the windows we've introduced this element into our design to offer sun protection, but this detail also gives a nod to the architecture of the Kadoorie Hill houses to tie the two together," Marani added.

"The new building and surrounding houses share common elements that make them one family."

"It's this attentive and reﬁned approach that will see the new homes passed from generation to generation, much like the existing houses in Kadoorie Hill," associate partner Bina Bhattachary added. "We put a lot of thought into every aspect of the design to imbue it with a sense of place and permanence."

Plant-filled balconies are also a nod to the lush greenery that surrounds the neighbourhood.

Billed as "ultra-luxury" the building has a mix of two, three-and four-bedroom residences with large windows offering natural light and vistas.

Typical three-bedroom and four-bedroom units will range from 1,839 square foot to 2,141 square foot.

The simplex penthouses out of the 175 residences have rooftop access, while two other simplex units have access to a flat roof on the same level.

Amenities include a clubhouse containing a lounge at the lobby level, with access to the gymnasium, children's playroom and outdoor swimming pool.

RAMSA was founded in 1977 as the eponymous studio of Robert A M Stern, a New York architect who served as dean of the Yale School of Architecture for 18 years from 1998 to 2016.

Visuals are by DBOX for Sino Land, unless stated.

This article was written by Dezeen for RAMSA as part of a partnership. Find out more about Dezeen partnership content here.