The Ocean Cleanup has teamed up with Yves Béhar to create a pair of sunglasses from plastic that the non-profit has collected from the Great Pacific Garbage Patch.

This marks the first time that the Dutch organisation has created a product from the plastic it has retrieved from the ocean as part of its attempt to go "full circle from trash to treasure".

Produced by Italian eyewear brand Safilo, the glasses have a classic shape reminiscent of Ray Ban's Wayfarers, rendered in deep, navy blue, with distinctive turquoise hinges connecting each arm to the frame.

"It was important for the glasses to embrace the natural, raw iridescence of the blue material, as for me it mimics the beauty of the sea and says something about the material's origin," Fuseproject founder Béhar told Dezeen.

The product is designed to be "useful and durable" and once it reaches the end of its life, it can be easily disassembled into its constituent parts and recycled once again.

"The material is a bit softer structurally than standard plastic, which delivers a nice feel in the hand and on the face," said Béhar.

"By designing a slightly thicker frame, we were able to transform the softer plastic composite into a solid and durable product.

"Our easily removable hinges are not inserted within the plastic as is common in traditional eyewear, which means the glasses can be repaired or recycled at the end of their use," he continued.

According to The Ocean Cleanup, the plastic used to create the sunglasses was entirely sourced from the Great Pacific Garbage Patch (GPGP) – an area of 1.6 million square kilometres between Hawaii and the coast of California where an estimated 79 thousand tonnes of plastic has accumulated. 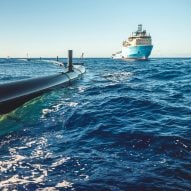 The Ocean Cleanup worked with independent certification body DNV GL to verify the plastic's origin and develop a new international standard for how companies can prove the "source and authenticity" of the marine plastic they use in their products going forwards.

Called the Chain of Custody Standard for Plastics Retrieved in the Hydrosphere, this sets out a number of requirements that companies need to meet including a traceable supply chain "from water to shore".

The glasses come with matching, tubular black cases, made from the 2,000 kilograms of plastic that were collected during The Ocean Cleanup's pilot mission.

This started in September 2018 and had to be aborted early when the non-profit's floating rig, which skims the surface of the ocean for plastic, unexpectedly broke down.

The actual glasses are made from plastic that was collected during a subsequent, second dispatch in June 2019 and returned to shore at the end of the year.

All profits generated from the sale of the sunglasses will go back into funding future cleanup missions, with each pair paying to clean an area of the GPGP equivalent to 24 football fields according to the organisation. 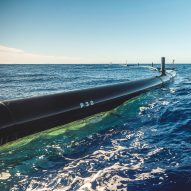 To collect the plastic the non-profit uses U-shaped floating barriers, which are pushed along the ocean by wind and waves, to scoop up plastic that is floating up to three metres below the surface.

Despite raising $30 million in funding, The Ocean Cleanup's approach has prompted criticism from the scientific community due to the fact that 94 per cent of the estimated 1.8 trillion pieces of plastic floating in the GPGP are microplastics smaller than five millimetres in size.

These are found not just on the surface but all the way down on the ocean floor and cannot be collected as easily as larger pieces. As Italian environmentalist Cristina Gabetti explained in an interview with Dezeen, "it's a soup more than an island [of floating debris]", as it is often portrayed.

Another environmental organisation, Parley for the Oceans, already repurposed collected marine plastic for a collection of sunglasses back in 2018.

As part of an ongoing collaboration with Adidas, the initiative has also released trainers, boots and an entire swimwear line, as well as football kits for Manchester United and Real Madrid fashioned from recycled, ocean-bound plastic.

More from The Ocean Cleanup