Exposing and tackling racism in technology is one of the goals of UK initiative A Vibe Called Tech. Dezeen spoke to founder Charlene Prempeh about the responsibility companies have in protecting the black community on and offline.

Launched in 2018, A Vibe Called Tech explores the impact that technology has on black people in the UK. Prempeh's work spans across the various forms that technology takes, from social media platforms to artificial intelligence (AI) and biometric devices.

Black people aren't being considered when technologies are developed

The initiative aims to outline the myriad ways that technology reinforces racial inequalities, as well as how it can be harnessed as a form of empowerment.

"The ways in which tech is used as a tool of oppression are numerous," Prempeh told Dezeen. "We often talk about it like it's new, but technology's been coming for black people since the beginning."

"Even when you look back to the start of photography, in certain lights or with the flash on, you couldn't get a black face," she added.

"There has always been this sense that black people aren't being considered when technology is developed, and that has just persisted."

Modern-day examples of this include AI and facial recognition, which still struggle to recognise the faces of black people and often misidentify them.

A 2018 MIT study, for instance, found that commercial gender-recognition systems misclassify darker-skinned females at rates of up to 34 per cent, while error rates among lighter-skinned males are around 0.8 per cent.

"Black men are invisible, but black women might as well be dead"

At the root of most of these issues is algorithmic bias, explains Prempeh. Not only are datasets largely composed of white subjects, with black women being represented even less than black men, but they are also shaped by the prejudices of the people collecting the data.

"Black men are invisible, but black women might as well be dead," said the founder when commenting on the lack of diversity in datasets.

"If you go and apply for that credit card and you don't get it, you might not have any idea that that decision was based on where you live, and you live in a space that's majority black," she continued.

"There's all this information being fed by a person into a machine, and unfortunately there are racial biases in each of those layers. But because a machine spits it out, there's this feeling that the final decision wasn't made by a person and so it can't be racist. But, of course, this machine is not operating solo."

One of the most dangerous elements of this kind of technology, which is often used behind-the-scenes on social media platforms like Facebook, is that its users aren't aware of the fact that they're under attack, said Prempeh.

"There's that quote about guns; guns don't kill people, people do. And technology is exactly that. Even a machine gun can only kill a certain number of people, but the problem with tech is how ubiquitous it is."

"There is a general lack of education about what technology is doing, and I mean that in the broadest sense. People don't really understand what tech platforms are doing with our data, or how algorithms are working on social media," Prempeh said.

"But that's the 101 of control, right? To keep people uneducated and unaware, but also thinking that there's nothing that can be done about it."

"There are ways of designing products to make them less racist"

This unawareness not only comes from consumers, says Prempeh, but from senior workers managing the platforms too, who often specialise in business rather than technology.

"When these people are hit with questions around racism or bias, their go-to is just to try and make the company more 'diverse', when actually there are ways of designing the products to make them better," she explained.

This might be at the very beginning of the design process, when establishing who the user will be, or at the testing stage. A Vibe Called Tech offers consultancy services to aid companies in ensuring people of all colours are considered.

"On the one hand, people are designing things, and therefore there's racism in them. On the other, there are ways of designing products to make them less racist. So it's a case of addressing both of those things, and they're not mutually exclusive."

Prempeh also stresses the need for online companies to ensure they are creating a safe space for people of colour (POC). She gives the example of an Airbnb host rejecting a black woman's booking.

"These smaller, gentler micro-aggressions are equally problematic. Immediately you look at this and you think that the problem is the racist person who wouldn't allow someone to book. But, actually, what's the role of Airbnb in this?" said Prempeh.

"How can [these companies] design a platform that doesn't allow people to behave in that way? How can they monitor and engage with communications between different users on that platform to make sure that those interactions are civil?"

"They need to realise that they have a responsibility and a job to protect people of colour on these platforms, because you can't assume that everyone is going to behave themselves," she added.

Companies have a responsibility in protecting POC online

Prempeh aims to encourage people to harness technology as a tool of empowerment.

She is planning on launching an additional platform called A Vibe Called Tech Health Check, which will allow users to see the biases that exist in new technologies in sectors such as employment, urban design and healthcare.

While Prempeh hopes this will enable individuals to see the ways certain technology they use affects them, she also hopes it will prompt companies and online platforms to recognise the problems in their own industries, and make the necessary changes in response to this.

She also hopes the new initiative will play a role in "black storytelling" – making sure the perspectives of black people are a part of global narratives.

This aim is what drove A Vibe Called Tech's latest photography project titled We Are All They, which saw them work with Gucci and Manju Journal to redefine Gucci's genderless 1961 Jackie bag.

The project, which marks Gucci's first collaboration with an African-owned media platform, highlights the Ghanaian concept of gender fluidity as, in most dialects in the country, there is no word for "he" or "she", meaning everyone is referred to as "they".

"For me, a key way of investing in black people is to allow them to tell their own stories, and the best way of doing that is to invest in black-owned media. So I approached Gucci with that," Prempeh said.

"And this is just the beginning. We're now going to be working with Gucci on an ongoing basis. And I think that's the point, isn't it? It's not this one off thing. You don't stop being black. Black stories don't go away. And for someone like Gucci to recognise that and want to build on those stories... I'm really proud to be working with them." 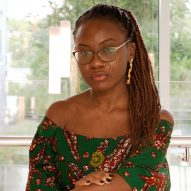 Prempeh founded A Vibe Called Tech in 2018, and has previously collaborated with the Tate, the Barbian and the Royal Academy to host talks and workshops on racism in technology.

Recently a number of organisations have formed to tackle racism in different industries, including Sound Advice, which focuses on improving racial diversity in the architecture industry, and United in Design, which aims to make the interiors industry more inclusive.