A sweeping colonnade and stepped plazas animate the concrete Boys and Girls Club that Centro de Colaboración Arquitectónica has built for children living in south-central Mexico.

The 3,400-square-metre complex is an after-school club for young people between the ages of six and 18 years who are living in unsafe or low-income neighbourhoods in Tecámac and Ecatepec.

It comprises three buildings that host a mix of recreational and educational facilities, linked by a corridor of 24 arches that Centro de Colaboración Arquitectónica (CCA) said is modelled on human vertebrae.

"This is a space that provides extracurricular educational, artistic, and recreational activities that promote positive values and community integration," the studio explained.

"The three buildings are linked by a long corridor that represents the idea of education as the backbone of the development of society – its 24 arches represent each of the human vertebrae."

CCA's Boys and Girls Club was completed in 2019 and is one of 10 similar campuses in Mexico that are initiated by the Boys & Girls Club of America.

The organisation exists to provide children and young people living in poor or unsafe areas with healthy and safe spaces to play, create and learn before and after school.

"CCA was commissioned by the Boys and Girls Club to build the tenth campus in Mexico, the largest to date, striking a careful balance by designing a building that communicated the association's values with a playful and attractive architecture," the studio told Dezeen.

The campus' design evolved from a manual by the Boys & Girls Club of America, which outlines the minimum spaces required to host the organisation's educational programmes.

CCA then adapted this into a group of buildings that could be built from concrete, as the material had been donated by a benefactor of the organisation specifically for the scheme.

The studio's design comprises an educational building, a two-storey arts centre, and sports hall, all linked by the arched colonnade.

Its sports hall is the most notable building on the campus, capped by a distinctive saw-tooth roof allows daylight down into a large, adaptable hall inside.

The campus' classrooms are contained in the single-storey educational building, alongside computers areas, a kitchen and a library.

These rooms are ventilated and lit by a courtyard at the centre of the building, which CCA designed to negate the need for windows – making the classrooms private and distraction-free.

The final building on the Boys and Girls Club campus is the two-story arts centre, which contains space for exhibitions, an auditorium, a dance studio and a dojo.

Here, there is also a room exclusively for teenagers to relax and attend educational workshops and training sessions tailored to their age group.

Wrapping around the Boys and Girls Club are several outdoor plazas, as well as basketball courts, soccer pitches, and gardens. 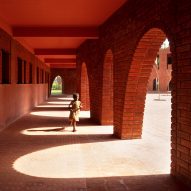 The plazas offer meeting spaces for visitors and have also been sculpted to the topography to ensure circulation between the buildings is efficient – with one incorporating a zigzagging ramp.

"It was meant to be a meeting point, a space created to generate encounters between individuals, enable them to interact openly and freely in a way that continually enriches their own experiences and enhances that of others," explained the studio.

CCA an architecture studio based in Mexico City that was founded by Bernardo Quinzaños and Ignacio Urquiza in 2008.

Other projects by the studio include a house in Hidalgo with concrete walls, planted patios and pools, alongside a business school on a lush site near Aguascalientes.

Photography is by Onnis Luque, Arturo Arrieta and Jaime Navarro.