A full-size model of Church of the Light takes centre stage in a survey of Tadao Ando's 50-year career – even though the architect told Dezeen his latest projects are his best work.

Tadao Ando: Endeavors at The National Art Center in Tokyo is an exhibition covering the architect's entire career. It starts with his transition from professional boxer to self-taught architect, then follows progress of the Osaka office he set up in 1969.

The show presents models and sketches of Ando's most acclaimed works, alongside an installation recreating the interior of the architect's studio and a video showing his involvement in post-disaster reconstruction in Japan, through tree-planting programmes.

However the architect told Dezeen he considers his active projects – including the conversion of Paris' stock exchange into a gallery – the pinnacle of his career.

"I do not think of this exhibition as being a retrospective. Being overly infatuated with your past accomplishments does not allow for opportunities to pursue new endeavors," Tadao Ando, 76, told Dezeen.

"This exhibition shows the possibilities of the future through the experience I have gathered during my career," he continued. "The highlights of my career are always the projects that I am presently working on."

"Currently, this includes the Bourse de Commerce in Paris and various efforts to improve the environment by cultivating the forests all around Japan."

For the exhibition, Ando created a 1:1 scale model of Church of the Light, a concrete church with a striking cross-shaped cut out in its front, which was completed in Osaka in 1989.

He said the mockup is designed to allow visitors to the exhibition to properly experience the architecture, but also to resolve a 30-year dispute between the architect and the client over the inclusion of glazing in the building.

Ando had originally proposed the cross cut-out be left completely open to the elements, but the client refused, claiming it would create an inhospitable environment for the congregation. For this replica, the glass was omitted.

"Architecture must be experienced in person. Photographs may represent the appearance of a building, but cannot replicate human perceptions of material, scale, and light," said Ando.

"I desired the Church of the Light to become accessible for the general public to experience. It is a 1:1 replica of the original building and holds complete integrity to the initial design concept."

"After the construction was completed, I visited regularly to convince the client to remove the glass," he continued.

"I eventually gave up and decided I would simply make it myself to fulfill my dream. In comparison with the original church, the experience of light and wind has significantly intensified."

Models of Ando's Punta della Dogana Contemporary Art Center in Venice, and his current project, which will see Paris' Bourse de Commerce building transformed into an art museum, are also presented in the show.

In addition, there is a large-scale model showing the design for Ando's recently completed project for a cemetery in Sapooro. The project saw a huge buddha statue surrounded by a lavender-covered mound carpeted in 150,000 of the purple-flowering plants.

Its use of exposed concrete and landscaping coupled with the dramatic play of natural light is characteristic of the architect's style.

Ando's career has been studded with architectural awards including the illustrious Pritzker Architecture Prize, won in 1995, the Person of Cultural Merit (Japan) in 2003, Commander of the Order of Art and Letters (France) in 2013 and Architectural Institute of Japan Prize, Japan Art Academy Prize in 1993.

Tadao Ando: Endeavors continues at The National Art Center in Tokyo until 18 December 2017. 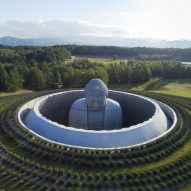