Dezeen's Virtual Design Festival has won two major awards, claiming both the digital initiative of the year and the special coronavirus response prizes at the Professional Publishers Association's annual awards for independent publishers.

The "superb" Dezeen Day conference was separately honoured at the Conference Awards 2020, where it received a bronze award for best new conference.

VDF praised for its global impact

The content has received over 1.75 million page views and 2 million video plays.

"What really impressed the judges was the sheer volume of quality content on offer and the innovative ways in which people all over the world were brought together," said the jury of the PPA Independent Publisher Awards at a virtual awards ceremony on Wednesday.

"The thinking behind this range of initiatives is really inspirational and clearly produced excellent results," the PPA wrote on its website announcing the results.

"The depth and breadth of digital experiences that the event delivered to the audience were cutting-edge and market-leading," it added.

Dezeen "built a whole new business model for the future"

The PPA judges also praised VDF for its commercial success and its legacy beyond the festival. Dezeen has now relaunched a number of the innovative new services that were conceived as part of VDF as permanent offerings.

Last month, we launched Dezeen Showroom, an affordable digital platform for brands to launch new products, while we have now produced and broadcast over 200 online talks. 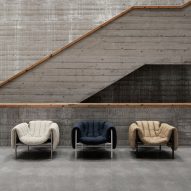 "We've seen other companies pivot their offerings in really impressive ways, but to us, Dezeen did more than that," said London Review of Books commercial director Renee Doegar, who was on the jury for the Digital Initiative of the Year award.

"This was a fast-footed response, it was delivered at remarkable speed and done to an incredibly high standard. But even more than that, we were impressed that you not only adapted and made something excellent out of diversity, but you built a whole new business model for the future and that's really what we were looking for."

Dezeen's inaugural design conference Dezeen Day, which took place in London at the end of last year, has also received an industry accolade, receiving bronze at the Conference Awards 2020 for best new conference with over 400 attendees.

Describing the sell-out event as "superb", Conference Awards judges praised the "ideas and thoughts behind the content", the diversity of the speakers and the fact that it managed to turn a profit in its first year.

Dezeen shortlisted for seven other awards

Dezeen is also in the running for seven other upcoming awards.

We are shortlisted for the brand of the year award at the IBP Awards, while VDF is up for the event of the year prize and Dezeen founder Marcus Fairs is in the running for the digital leadership award.

Dezeen's Face to Face podcast series, which features in-depth interviews with leading architects and designers including Es Devlin and David Chipperfield, is up for best podcast at the Archiboo Awards.