The table, which is shortlisted in the workplace design category of Dezeen Awards 2020, was produced on Milingimbi Island by Manapan – a furniture brand owned and operated by the Indigenous Australian Yolngu people.

The Gulnura Table's form is reflective of traditional shields used in battle and for ceremonies, which were often highly decorated and featured intricate carvings.

It is named after the Gulnura, a lightning snake which is said to bring fresh water to Milingimbi Island every wet season.

"The representation of the serpent can be seen in the joinery of the tabletop, which references cultural meaning that is central to our First Nations collaborators," Foolscap Studio founding director Adèle Winteridge told Dezeen.

"Scaly, cross-hatched carvings — meticulously chiselled and hand-painted around the table's perimeter — reference natural and built lines found on an airport runway in Manapan's home on Milingimbi Island, while monolithic legs were hollowed out to house cable management, before being hand-chiselled and stained dark for dramatic contrast."

The Gulnura Table was crafted from locally-grown spotted gum, a native Australian timber, and has a durable matte sealant and finishing coat on top to bring out the natural grain, colour and tones of the wood.

"We chose spotted gum for a number of reasons; while it's robust, sustainable and relates to the finishes throughout the project, it importantly speaks to the Indigenous narrative that was imbued by the makers at Manapan," Winteridge said.

As well as being decorative, the fact that the Gulnura Table is made from hardwood means it is a solid piece, which makes it suitable for high-wear surroundings such as the airport.

The table, which seats 16, will be used as the board table in the executive area – the boardroom, CEO's office and adjacent meeting room – of Melbourne Airport. It was designed as part of a suite of furniture that also includes an executive meeting table, CEO workstation and custom credenzas.

When the studio was commissioned for an extensive redesign of Melbourne Airport's mezzanine workspace, the potential of collaborating with First Peoples of Australia was discussed at an early stage in the project. A dialogue between Foolscap Studio and Manapan led to the finished product. 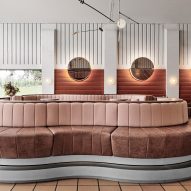 "Making and craft is an intrinsic part of First Nations culture," Winteridge said.

"We were privileged to work with and learn from the makers at Manapan, who use techniques which have been used by Indigenous Australians for thousands of years – such as sculpting, woodcarving and hand painting, to name just a few."

"These skills have been passed down through multiple generations."

The Gulnura Table is up against four other workplace designs in its category for Dezeen Awards 2020, including Andrea Ruggiero's noise-absorbing room dividers Soundsticks and March Gut's socially-distanced serving tray Alma.

Photography is by Tatjana Plitt.