Design studio March Gut has created a maple wood board for a hotel restaurant in the Austrian alps, which allows all dishes and cutlery to be served in one trip and while maintaining social distance.

At a length of 1.2 metres, the Alma tray is just longer than Austria's minimum required distance of one metre, which must be maintained from people of other households in public to help stem the spread of Covid-19.

It was designed for the Biohotel Schwanen in Bizau, Austria.

A rounded foot on one end allows a waiter to slide the board across the table with one hand, delivering all of the food and drink for a group simultaneously, without having to repeatedly lean over the diners.

Set in the centre of the table, the tray is designed to remain in place throughout the duration of the meal, allowing people to share or retrieve their dishes before returning them to the tray to be taken away.

The product has been shortlisted for this year's Dezeen Award in the workplace design category and was designed entirely during lockdown.

As a result, the studio communicated with its carpenter and Biohotel Schwanen owner Emanuel Moosbrugger only via the internet and by sending prototypes across the country. 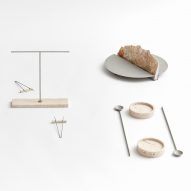 "Of course you need a bit of dexterity and strength to handle the trays but for the experienced staff, it was not a big deal and the product was quickly accepted."

The final result is reminiscent of the kind of tray table used for eating in bed, with indentations and fabric inlays on top to prevent the dishes from slipping.

It is rendered in locally sourced maple wood that hasn't been painted or oiled but simply impregnated with several layers of soapy water, allowing its pale finish to take centre stage.

March Gut's ultimate aim was to create a way of maintaining the communal act of sharing a meal, while still adhering to the kind of safety measures that are necessary during a global pandemic.

"We prefer to call it physical distancing rather than social distancing because halting all social life brings with it an unacceptable economic crisis and mental stress as well," March told Dezeen.

"People in small groups or living in the same household should be able to eat together, go to the theatre or an exhibition, so designers are now in the position to find creative solutions to deal with the challenges of these times. "

Based in the city of Linz in Upper Austria, March Gut has previously designed a wine tavern with stepped seating on the roof to allow visitors to take in views of the surrounding vineyard.

Among the projects to be shortlisted for the Dezeen Award in the workplace design category alongside Alma is a series of school chairs that encourage children to move and acoustic panels that take cues from Japanese design.

Photography is by Roswitha Schneider.