As we prepare to announce this year's winners, architect Norman Foster has described judging this year's Dezeen Awards as "a great privilege and pleasure" while fellow judge Michelle Ogundehin said the quality of entries was "absolutely extraordinary".

With the winners set to be announced in a series of three, 20-minute Dezeen Awards 2020 Shows starting today, Foster, Ogundehin and Paola Antonelli recorded video messages describing their experience as judges.

"It's been a great privilege and a pleasure to be part of the judging panel on this year's entries," said Foster, who judged the architecture categories.

"I'd like to congratulate everybody who's competed, those who've won, and the magazine for this extraordinary initiative."

The architecture category winners will be unveiled at 4:00pm UK time today in the first of three Dezeen Awards 2020 Shows hosted by poet and broadcaster LionHeart. Foster's full video message will be broadcast as part of the show. 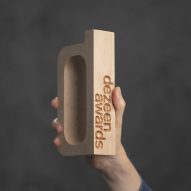 "I was lucky enough to be on the judging panel for the interiors awards and I am very excited to be able to share that the quality of entries was absolutely extraordinary," said architect and broadcaster Michelle Ogundehin, who judged the interiors categories.

Interiors and design winners revealed on Tuesday and Wednesday

Interiors winners will be named in the second Dezeen Awards 2020 show at 4:00pm UK time on Tuesday 24 November.

" I had the opportunity to look at what happened in the world of design last year," said Antonelli, who judged the design categories." And I hope that you will enjoy poring over the finalists' entries as much as I have. "

Design winners will be announced in the final Dezeen Awards 2020 Show at 4:00pm GMT on Wednesday 25 November.