Jaipur Rugs weaver Kasturi Balotia has released her debut rug design as part of the company's Manchaha initiative, which aims to take textile workers in rural India from a position of "exploitation to empowerment".

Called Deepak, the rug has been shortlisted for this year's Dezeen Award in the homeware design category, with winners set to be announced on 25 November.

Balotia, who normally executes the designs of others, was given the opportunity to create the pattern spontaneously on the loom, using yarn offcuts that would otherwise have gone to waste.

In this way, the Manchaha project hopes to improve the social and economic standing of female weavers like her, while making the industry itself more circular.

"We feel that one cannot be done without the other," Jaipur Rugs founder Nand Kishore Chaudhary told Dezeen.

"Change is always from the ground up and if we do not work to uphold the dignity of the art and its artist then we won't be able to achieve the sustainability goals we aspire to."

Dezeen Awards judge Natsai Audrey Chieza applauded the project, describing it as "the future of design".

"This is a noteworthy intervention that, without overstatement or hype, fuses equity-based, impact-oriented and sustainability-focused design, craft and production," she said.

By allowing weavers to express themselves through their craft, the project hopes to renew their passion for the tradition of hand-knotting, thereby preserving it for future generations.

The Deepak rug is made of 222,184 individual knots per square meter, each tied individually and by hand over the course of two months.

This process coincided with Diwali season, leading up to the Indian festival of light, which is immortalised in the rug through a pattern of colourful, trapezoid lanterns.

While making the rug, Balotia watched the wheat fields in her village change with the seasons, a context that is immortalised in the rug through a zig-zag pattern, suggesting the tracks of a plough paving the way for fresh seeds.

This scene changes as monsoon season sees the wheat stalks basked in sunlight, drenched in puddles or whipped around by punishing winds. 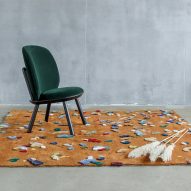 According to Chaudhary, the project has created a regular and sustainable income for Balotia and other women, giving them not just financial stability but also causing a marked change in how they are viewed in their households and communities.

"The Manchaha project is a great tool against the patriarchy. As the women become earning members of the family they slowly, but surely rise in status and get a voice that they can use for their own transformation," he said.

"After being nominated for several design awards, Kasturi has found more confidence in her creative thinking and design style. The news of her nomination has spread fast in her small village, elevating her social standing in her community," he continued.

"By nurturing the creative potential of rural India, Manchaha transforms a community from exploitation to empowerment."

At the same time, the project reclaims silk, wool, cotton, jute and hemp yarn, leftover from the production of other rugs, and turns it once again into a valuable material.

"Surplus yarn is either incinerated or goes straight to landfill. Repurposing it helps reduce wastage that had no solution and makes the colour palette of these rugs as unique as their design."

Other projects that have been shortlisted in the homeware category alongside Deepak include Poppy Lawman's steam-bent Bue brushes, which hope to encourage a more mindful way of living, and a series of porcelain tableware that wears its blue glaze layered internally.