The founders of design house The Brooklyn Home Company have created a hotel in New York's Finger Lakes region that draws on their summers growing up on Canandaigua Lake.

The Lake House on Canandaigua is named after its location on one of the 11 long and narrow lakes that form the region aptly named the Finger Lakes.

The brother and sister founders of The Brooklyn Home Company, whose family previously owned a motor-lodge on the same plot, worked with New York-based Studio Tack to create a new project to reinvigorate the site.

"We wanted to create something special for the community and also something that would put the Finger Lakes on the map as a destination," said The Brooklyn Home Company founder William Caleo, who runs the firm with his sister, designer Lyndsay Caleo Karol and her artist husband Fitzhugh Karol.

"We grew up in this place, one of the greatest natural environments in this country, with the best crystal clear lakes and rolling, green hills," Caleo explained.

"But, the Finger Lakes, with all its natural beauty, was relatively geographically unknown as a place," he said. "We wanted to change that. Guests from around the world deserved to see this place."

Built from the ground up, The Lake House on Canandaigua contains a number of buildings, including the main hotel with 123 guest rooms and suites, a timber frame events space for weddings and daily yoga classes, the casual Sand Bar, The Rose Tavern Restaurant and The Lake House Spa by Soveral.

There is also a swimming pool and an outdoor hot tub where guests can relax with views of the lake all year round, and a gym.

Running along the rear of the property is a private boardwalk for water sports on the lake, or to enjoy fishing and a series of firepits for making s'mores.

"Our concept for the design was inspired by our summers growing up on the same lake," Caleo added. "We wanted the hotel to feel like a home so when guests check in it feels familiar immediately."

"It was also important for us to connect guests to the lake and show how beautiful and pristine this region is, whether by sitting on the deck in an Adirondack chair or reading a book in the library overlooking the water," he continued. 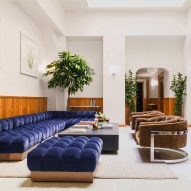 White-painted and gabled structures that form the 109,745-square-foot (10,196-square-metre) complex are intended to be undefinable. Studio Tack partner Ruben Caldwell explained the aim was to create buildings that could have been built one hundred years ago.

"The design concept revolves around trying to capture some of that narrative and history, then project and imagine it forward into the distant future," he told Dezeen. "The physical manifestations of this concept evolved from an idea of bridging the past and future."

"The goal was to suggest a place that had long existed, perhaps a beloved family home, that had been carefully updated over the years," he told Dezeen.

"The site is intended to allow for exploration, and it was important that the spaces not be monolithic in their perspectives," Caldwell added. "We imagined a family coming back year after year and finding something new each time."

This concept continued inside where the design team have created a series of cosy spaces with eclectic furnishings.

The entrance leads into a bright white lobby featuring a monolithic reception desk, and a lounge-style layout composed of leather and wood furnishings, and baskets stacked with rugs. Accessed from here, is the library and bar painted in contrastingly dark tones and warmed by a log fire.

"At a more detailed scale we were interested in exploring materials such as wood and canvas that suggest a utilitarianism that is simultaneously comfortable and familiar," Caldwell said. "Our interest more broadly was in using familiar materials in ways that invite a closer look and moment of reflection."

The team created a variety of bedrooms, including the Double Queen and the signature Lakeside King Suite. The latter features a cosy lounge with a fire and glass doors that open onto a terrace with views to the lake.

The Lake House on Canandaigua is among a number of hotels designed by Brooklyn-based Studio Tack.

Others in New York State include a revamped mid-century motel on the North Fork of Long Island and a boutique hotel that occupies a renovated 1960s guesthouse in the Catskills.

Photography is by Chris Mottalini.