Self-professed "mother of silicone" Beate Karlsson uses the rubbery material to make shoes in the form of human claws and padded shorts that imitate Kim Kardashian's bum in a bid to design never-before-seen items.

The Claw shoes, which have been 3D printed from a mixture of wood fibres and silicone, take the form of a giant human hand propped up on all four fingers and thumb in the gesture of an animal's claw.

Straps moulded from silicone extend from the top of the shoe to form a sandal that the model can walk in, wearing the claws like stilts.

Bows tied across the top of the shoes conceal the wearer's foot to feed the illusion that they are extensions of their legs.

The shoes form part of Karlsson's ongoing project titled X-treme Products, which has seen her create various wearable, tongue-in-cheek items for a hypothetical world determined by the idea of "otherness".

The Swedish artist and designer takes literal shapes, like a hand, and distorts them until they are almost unrecognisable before turning them into a functional object.

In addition to the Claw shoes, Karlsson has designed other footwear called Fat Baby Shoes that mimic giant feet in frilly sliders.

Other designs include oversized items of clothes worn as one garment, like an enlarged pair of trousers that rise up to the model's neck, and a giant top that extends down to the wearer's knees and features a large drip-effect collar.

As part of a separate but similar project, called The Bum, Karlsson created a wearable replica of reality star Kardashian's bum, which often makes its way into mainstream media headlines, with perhaps the most famous example being her cover for Paper Magazine that "broke the internet".

Due to the excess of images online of Kardashian's near-naked posterior, Karlsson was able to work with fellow artists Ida Jonsson and Simon Saarinen to create a scaleable version of it in silicone.

The playful, rubbery design can be worn like padded shorts to create the effect of having a bum like that of the American TV star.

Karlsson describes her work as "fictional fashion". Her intention, she told Dezeen, is to create pieces that "belong in a future imaginary world where there are less norm-driven preconceptions".

"I've been quite passive towards the fashion industry, as the value of design in many ways has been lost in my opinion," said the artist. "I think I'm part of a group of young designers who feel that imitation has replaced innovation, much due to the consumer society." 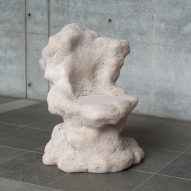 "Therefore, my biggest quest has been to seek otherness and actual innovation when I design," she continued. "I'm not saying I am creating revolutionary pieces, but I strive to not create designs that are recognisable, since I think that's what's interesting about being a designer."

"I hope it conveys something new and conscious and that it together with other young designers reshapes the landscape of the industry."

Drawn to silicone for its flexibility, durability and ability to be used for a vast range of applications, Karlsson now uses the material almost exclusively in her work.

"I absolutely love silicone! I have always been passionate about handcrafting in clay," she told Dezeen. "For me, it's the best way to communicate a three-dimensional design. You can get an exact shape and there are no limitations if you can master the craft yourself."

"Silicone is amazing because you can make moulds from your clay figures, and it is a durable material," she added. "So, it's been great when crafting things like shoes that have to be flexible and strong."

The Stockholm-born artist, who is currently based in Florence, Italy, works as a designer for fashion label Pyer Moss and is creative director at clothing brand AVAVAV. Her quirky designs have been noticed and requested by artists like American rappers Rico Nasty and Tierra Whack.

Other designers have also turned to silicone for its flesh-like appearance, including Elissa Lacoste, who used the material to create a series of "grotesque" peachy-toned furniture. 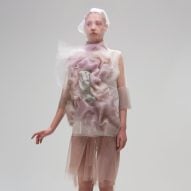 The garments respond to their surrounding environment by feeding data to a series of actuators and magnets interlaced with silicone, which cause the fabrics to ripple, expand and contract as if they are alive.