Dezeen teamed up with Carl Hansen & Son for a live talk in which CEO Knud Erik Hansen told the story of the brand's 110-year history.

Dezeen's founder and editor-in-chief Marcus Fairs was joined by the Danish furniture manufacturer's CEO to explore the lasting global impact of Danish design and the enduring popularity of the brand's classic products.

Founded in 1908 by cabinet maker Carl Hansen, the company is one of the biggest producers of midcentury Danish furniture in the world.

The company's connection to Denmark's design legacy began in 1949 when it collaborated with designer Hans J Wegner on a collection of furniture, which included the now-iconic Wishbone chair.

Since the 1950s, Carl Hansen & Son has been the largest producer of Wegner's furniture in the world, while also producing and preserving the work of several other giants of Danish design including Arne Jacobsen, Kaare Klint, Bodil Kjær, Børge Morgensen and Poul Kjærholm amongst others.

"This collaboration and the many that followed demonstrated what can be achieved when unprecedented and uncompromising quality, design and production come together," the brand explained to Dezeen.

With his grandfather, father, mother and brother all having run the company, Hansen has spent his life immersed in an environment that has fostered some of the best-known designers to have come out of Denmark.

Before taking over the family business, Hansen worked for more than 25 years in global shipping and trading.

Since taking the helm from his brother in 2002, the company has grown from 20 to 400 employees worldwide and opened flagship stores and showrooms in New York, San Francisco, Tokyo, Osaka, London, Milan, Stockholm and Oslo. 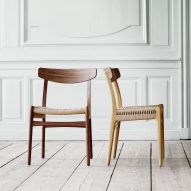 The talk also covered how Hansen has transformed the company since taking over, what the future holds for it, and how Danish design could evolve to meet the challenges of the future.

This year, the brand released a collection of lighting products by Danish designer Mads Odgård billed as being the "simplest possible lamp."

In 2018, it opened a store and showroom in London's Pimlico neighbourhood as part of its expansion in the United Kingdom.

This talk took place on 9 December 2020. See Dezeen Events Guide for an up-to-date list of architecture and design events taking place around the world.