Canadian studio Architecture49 has completed Le Littoral, a holiday rental property in Charlevoix, Québec, which was informed by local architecture but has been given a contemporary feel with an off-centre upper level.

The house, which is set next to the Saint Lawrence River in Canada, was built from a skeleton of locally sourced, FSC-certified wood clad in eastern white cedar.

In order to minimise disruption to the landscape, Le Littoral was constructed high up, leaning on a slope that overlooks the river and La Malbaie Bay. Architecture49 decided against a basement as that would have required "extensive excavation".

The 220 metres-square building (2,400 square feet) features an off-centre volume on the second level wrapped in locally-sourced, pre-painted metal sheets, a material that is often used for roofing in both residential buildings and farm houses in the area.

This upper volume houses the kitchen, dining and living spaces under a gabled roof.

"From experience, when you have family gatherings, there's always one or two people who don't want to party and would rather go to bed," Architecture49 designer and project manager Viviane Zhang told Dezeen.

"There's nothing more annoying, when you are trying to rest, than to hear people or even a dishwasher running right on top of you," she added. "I wanted the bedrooms to be as quiet as possible and to have no functions above them was important in achieving this."

"As such, the kitchen, dinning and living spaces – effectively the entire upper volume – was shifted to the side to clear the bedrooms."

This move also helped to create a roof terrace on the upper floor.

The shape of the building was informed by local farm buildings, which Zhang said are "simple and efficient".

"The sloped roofs are structurally very efficient," she said. "It sheds rain and snow well – and boy does it snow in Charlevoix! –  which is the main function of any building envelope."

"It also identifies with the region that is rich in terms of variety of farmers and producers."

Le Littoral drew on the shapes of these farm houses, but Zhang interpreted them in a more minimalist way.

"I thought about why someone would be there, what environment were they in and how would they use the space," Zhang said. "The answers gave way to the form."

The house was laid out in a precise axis to give residents a view of the river at the front and the forest at the back, and the general shape of its plan follows that of the land. 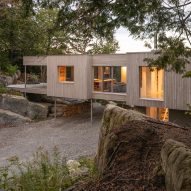 "Orientation of the rooms and their location was also considered to optimised heating and cooling," Zhang said.

"Bedrooms tend to require less light and need to be cooler, so were placed on the lower floor is an example."

Le Littoral, which was designed for a client who wanted to create a high-end holiday rental where families, friends, or colleagues could gather, also features a swimming pool, sauna, fireplace, and spa.

The house can sleep eight adults and five children.

Other Canadian nature retreats include the Forest House I, which is raised on three-metre-stilts, and the two-toned Chalet Lakeside east of Montréal.