Mexico's Esrawe Studio has designed offices for a law firm in Mexico City with walls of books as a centrepiece.

Esrawe Studio – which was named Dezeen Awards 2020 interior design studio of the year – completed the headquarters for a law firm. The studio has nicknamed the company Corporate C as it wished to remain confidential.

The office is composed of two wings that form a V-shaped floor plan and span two floors, which are connected by a wide wooden staircase. Pale oak wood walls around the stair form bookshelves to display the firm's extensive book collection.

"The firm posses with pride one of the most relevant law book collection in the country," Esrawe Studio explained.

"One of their main requests was to display them for the use of the team and visitors, which created for us the perfect excuse to use the library not only as a container but mostly to represent metaphorically the spirit and tradition of the firm."

Wooden ladders are placed on wheels and runners along the shelves to make the books accessible, while benches with grey cushions beside the stairway provide a spot for employees to read. The books add a pop of colour to an otherwise simple materal palette composed of the pale wood and soft grey furnishings.

In addition to making the most of the books, Esrawe Studio was tasked to create plenty of informal areas for Corporate C employees – of which there are over 300 – to engage in events, announcements, lectures and conferences. 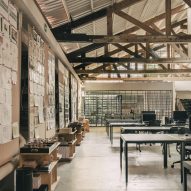 It responded by arranging specialist teams into groups of cubicles and desks it describes as "clusters or neighbourhoods" with the space in between is intended for informal gatherings.

This includes an area on the ground floor that is topped by a circular opening to the floor above. There are also benches with stools that wrap around the stairway on this level.

"Between the clusters we have integrated different configurations of lounge areas for informal meetings, gathering points and breaks that promote interaction, community and a sense of belonging," said Esrawe Studio.

Corporate C's 5000-square-metre headquarters is located inside a building in the capital city designed by Mexican architect Teodoro Gonzalez de León. "It has one of the best views in the city to the most important park, Chapultepec, and its volcanic skyline, in particular from the council hall," said Esrawe Studio.

To maintain views and natural light, offered by glazed walls, the studio encased private workspaces on the outer edge in glass boxes.

A number of these also wrap around an outdoor terrace, which is at the intersection of the two wings on the lower level. Designed by Taller Entorno, it features a coffee shop and a lounge area integrated with a garden.

Esrawe Studio was founded by industrial designer Hector Esrawe in Mexico City in 2003.

The studio, which also recently its own workspace inside a former dance hall in the city, was named studio of the year at Dezeen Awards 2020 last month. The studio's design for Tori Tori Sante Fe restaurant was also awarded the restaurant interior of the year.