Vietnamese studio Vo Trong Nghia Architects has created a 16-metre-high bamboo dome for Vedana Restaurant, which is built over an artificial lake facing the mountains in Ninh Binh Province.

At 18 metres wide and 16 metres tall, the bamboo dome is the tallest yet from Vo Trong Nghia Architects. Previously the practice designed a spiralling bamboo roof for a cafe in Vinh.

The restaurant serves the resort's 1,350 guests and can also be made available for weddings.

Although it appears to be three separate gabled structures, the dome is actually a single structure made of 36 bamboo modules.

An oculus at the apex of the dome creates a shaft of light through the centre, highlighting the flower-like pattern created by the intersecting arcs of bamboo. 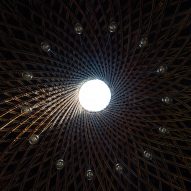 At the colonnaded base, the restaurant opens out onto the artificial lake. As well as making for a pretty view, the lake acts as a natural air conditioner during hot and humid summers, cooling the air as the water evaporates from its surface.

Rainwater and runoff from the mountains collect in the lake, which is also used to irrigate the trees and plants that grow around the resort – including 15,000 blossom trees that were planted specially.

Trees in round planters are also set into the lake around the perimeter of Vedana Restaurant.

Vo Trong Nghia Architects has also done the master plan for the rest of the resort, which includes 135 villas, five "condotels" and eight bungalows on stilts over the lake.

The practice, which was founded by Vo Trong Nghia in 2006, has also built a resort that looks like beach huts for a small island off the Cat Ba Archipelago.