Vietnamese studio Vo Trong Nghia Architects used 42,000 pieces of bamboo to create the complex, sculptural form of this entrance building for a resort on the Vietnamese island of Phu Quoc.

The building welcomes visitors to Grand World Phu Quoc, which is part of the Phu Quoc United Center – a leisure and entertainment complex occupying more than 1,000 hectares on the island.

Vo Trong Nghia Architects was commissioned to design a structure that embodies Vietnamese culture and provides a bold symbol at the entrance to the expansive site.

The welcome centre has a gross floor area of 1,460 square metres, and is made from bamboo using construction methods that the studio has refined over many years.

It was completed using approximately 42,000 bamboo culms – the hollow stems of the grass species that grows rapidly in Vietnam's tropical climate.

The studio claimed that the project, which uses ropes and bamboo pins to connect the culms together, was more complicated than its previous bamboo buildings due to the hybrid structural systems used.

"The joint system is challenging as we employed a lot of structural systems, and the details of them meeting each other is challenging," the studio said.

The dense structure comprises a series of arches, domes and grids, with an internal void sculpted into the forms of a lotus and bronze drum.

The bamboo framework produces interior spaces that feel open and transparent, due to the grid structure allowing light to penetrate through it. 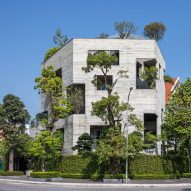 Skylights incorporated into the building's thatched roof also allow daylight to illuminate the interior, while the grid system enables breezes to ventilate the space naturally.

"The light comes in beautifully and, along with the natural colour of bamboo, creates a warm and intimate atmosphere, even though the structure is very open in terms of airflow," the studio added.

Visitors arriving at the resort cross a plaza and follow a path that bridges a shallow reflecting pool, before entering the welcome centre through an arched opening.

The arched passage extends through the building, leading into two halls that are shaped like a lotus and a bronze drum.

These sculpted internal voids represent traditional symbols that respond to the client's requirement that the building should embody Vietnamese culture.

In a 2014 interview with Dezeen, Vo Trong Nghia, founder of the eponymous studio, described bamboo as the "green steel of the 21st century".

He added that the material, which is abundant and affordable in his native country of Vietnam, is particularly suited to creating open or semi-outdoor spaces.

Nghia established his architectural practice in 2006. Previous bamboo projects completed by the studio include a restaurant with a domed roof set on an artificial lake and a series of beach huts with thatched roofs that form part of a resort on a small island.

In addition to its work with bamboo, the studio is known for exploring various low-energy architectural solutions, and for incorporating plants in many of its projects.

In Vietnam's Ha Long Bay, Nghia's office designed a villa with trees growing through its concrete walls, while tropical plants cover the balconies of a hotel in Danang.