A new runway for London's Heathrow airport designed by architecture firm Grimshaw could go ahead after a ruling against it was overturned by the UK's top court.

The third runway at Heathrow was blocked in a landmark case earlier this year, when the court of appeal agreed that expanding the airport would jeopardise the country's commitment to the Paris Agreement to limit global warming.

However on 16 December 2020, the supreme court overturned the decision, allowing Grimshaw's £14 billion expansion to proceed.

"International treaties are binding only as a matter of international law and do not have an effect in domestic law," ruled the judges.

"We welcome the supreme court's decision, and hope that it helps to give confidence to UK airports to build towards a more sustainable future," said Grimshaw partner Jolyon Brewis.

"This will also require the government to reaffirm its Airports National Policy Statement (ANPS) to help our aviation sector plan for the future of air travel to link British people and goods to the rest of the world," he added.

"Grimshaw is ready to help design this future when required."

The architecture firm has plans to build a "world-class sustainable airport", featuring a glass terminal building filled with trees.

Heathrow, the world's second-busiest airport before the coronavirus pandemic, has already acknowledged that it won't need a new runway for 10 to 15 years after international travel nosedived.

A third runway for Heathrow was approved by parliament in 2018.

Activist groups including Plan B Earth, Greenpeace and Friends of the Earth challenged the government, arguing that expanding Heathrow would be unlawful because it would contradict the UK's commitment to an international treaty for limiting global warming to 1.5 degrees Celsius.

It was the first time an infrastructure project had been blocked for contravening the Paris Agreement.

But the supreme court disagreed with Plan B's interpretation of the Planning Act 2008, under which the ANPS falls, which states in section 5(8) that new projects must take existing government policy into account.

"The court rejects Plan B Earth's argument that the reasons in the ANPS needed to refer to the Paris Agreement Targets in order to comply with section 5(8)," said the judges. 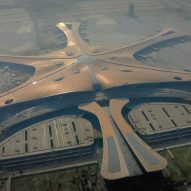 Lawyers and environmentalists have now launched a separate case against the UK government in regards to the Heathrow expansion.

Members of the Good Law Project are arguing that since the ANPS was published the government has made two legally binding climate change promises for Britain: to be net-zero by 2050 and cut carbon emissions by 68 per cent in time for 2030.

Airports have been at the centre of debate in the UK architecture industry after first Foster and Partners then Zaha Hadid Architects withdrew from climate change network Architects Declare over the firms' decisions to keep designing international airports.