Plans to expand UK's Heathrow airport by architecture firm Grimshaw are in disarray as a court has deemed a third runway illegal due to climate change implications.

The UK's court of appeal ruled today that a new runway was illegal because government ministers had not taken into account the Paris Agreement – a treaty between countries to try and keep global temperature rise below 1.5 degrees Celsius.

It is the first time a court has passed a ruling based on the Paris Agreement and potentially could set a precedent for challenges brought against projects with high emissions.

Activists and local groups, including Plan B, Greenpeace and Friends of the Earth opposed the third runway on environmental grounds. They successfully argued that the government had not assessed how the extension would be compatible with the goals of the Paris Agreement.

The UK has also set a target to reduce greenhouse gas emissions to net zero by 2050.

Third runway not ruled out

However, the judge did not rule out a third runway, but said it would have to be compliant with the government's climate change policies.

Heathrow said it would challenge the court's decision. Dezeen has reached out to Grimshaw for a statement. 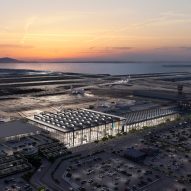 The airport, which currently serves 80 million travellers a year, wants to expand its capacity to 140 million passengers by 2050.

International Airlines Group, which owns British Airways, has criticised the airport claiming its extension will cost closer to £32 billion and called for an independent review of the climate implications.

Signed by 197 countries, the 2016 Paris Agreement replaced the Kyoto Protocol. Its signatories have committed to keeping global temperature rise below 2 degrees.

In 2017 president Donald Trump announced that the US would withdrawing from the agreement. An official notice of its intention to withdraw was sent in 2019 and denounced by the American Institute of Architects.

New airports and expansions are still being built around the world. Zaha Hadid Architects, which lost out to Grimshaw in the Heathrow bid, has recently completed an airport in Beijing and has plans for one in Mumbai and another in Sydney.

Grimshaw is building a new terminal for New York's Newark airport, and Studio Gang won the competition to build another terminal at O'Hare in Chicago.

However as awareness of the climate crisis grows, attitudes towards air travel are changing. Foster + Partners plans for a new terminal at Marseilles airport are being scrutinised by environmental authorities over its compliance with France's goal to be carbon neutral by 2050.