Gismondi founded Artemide in 1960 with fellow designer Sergio Mazza and built it into one of the most innovative and successful Italian lighting companies.

"With the death of Ernesto Gismondi, we lose one of the protagonists of that world of design that made Milan great," said Milan's mayor Giuseppe Sala.

"He illuminated the world with Artemide, used plastic for the first time to make furniture, raced with his head held high in the seas of politics and entrepreneurship, opened new horizons in design."

"I will miss his anti-rhetorical genius," Boeri added.

Based in the Milan suburb of Pregnana Milanese, Artemide produces classic designs such as the 1972 Tizio desk lamp by Richard Sapper and the 1987 Tolomeo desk lamp by Michele de Lucchi.

The brand is now part of Artemide Group, which consists of numerous subsidiaries plus design brand Danese, which Artemide acquired in 2014. Gismondi was president of the brand at the time of his death.

Born in San Remo in 1931, Gismondi was a member of the influential Memphis design movement. He also designed a number of products for Artemide.

He was also the vice president of ADI, Italy's Association of Industrial Design, and won the Compasso D'Oro for lifetime achievement in 2018.

"Founder of Artemide, he immediately uses design processes as a distinctive factor and in this long process encourages and enhances collaborations with the world of national and international design. A coherent example of how design can be a concrete strategic lever for cultural and economic growth, it has always worked so that Italian design can be a virtuous example at an international level." 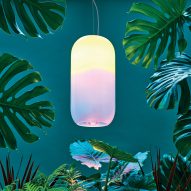 He also received the Ernst & Young Prize for Entrepreneur of the year in both 2008 and 2009 and was named a "Cavaliere del Lavoro," an Italian award for important figures in industry, by Italian president Giorgio Napolitano.

His wife, the architect and designer Carlotta de Bevilacqua, is the current vice president and CEO of Artemide and president of Danese.

Photography is by Pierpaolo Ferrari unless otherwise stated.