The Node system has been designed by the Norman Foster-led practice in collaboration with lighting company Artemide, and heating and ventilation company Price Industries.

It consists of a range of devices including lights, sprinklers, speakers and occupancy sensors. Cameras are also integrated into the system, which can be either mounted on or within a ceiling.

The devices are connected to a standardised wiring system that links them together, meaning that the building's services can be controlled from a single point.

Launched last month at the Light + Building trade fair in Frankfurt, the system was created as a result of Foster's belief that building services should be considered as part of the design process.

"Node emerged from a desire to create an integrated system for a building service that offers a single flexible solution, simplifying the specification, installation and operation while operating on a common platform that allows for future change," said Mike Holland, head of industrial design at Foster + Partners. 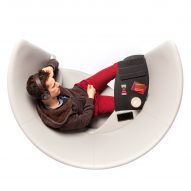 Each of the devices within the system is shaped like a circular node – all sharing the same materials and visual characteristics.

A range of lighting fixtures that will be manufactured by Artemide, named Hoy, have also been created specifically to work with the system.

With the aim of making it as versatile as possible, the designers opted for modular functionality – meaning zones can be added, or removed from the network without having to rewire.

"The versatility of Node embraces ideas of wellbeing and sustainability – maximising the efficiency of the building and giving it the ability to change over time," said Holland.

"Looking towards the future, we believe buildings will be far more responsive and data-driven, and Node is a step towards creating a dynamic and smart built environment," he continued.

While best known for its architecture, Foster + Partners has a long record of industrial design, including pieces like the Arc table for Molteni&C and the Dot lamp for Lumina. 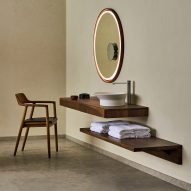 The firm, which ranked at number nine on Dezeen Hot List 2017, recently designed a chair for people working in busy spaces, while practice founder Norman Foster is working with cycling brand Rapha to design a range of cross-country ski wear.