New York's government has revealed plans for a 366-metre-long elevated walkway that will connect the High Line in Manhattan to the recently extended Penn Station.

New York Governor Andrew Cuomo announced on Sunday 10 January that he plans to build an extension to the High Line – a disused railway track that was turned into a park in a collaboration between American design studio Diller Scofidio + Renfro,
James Corner Field Operations and Piet Oudolf.

An L-shaped walkway will be built to connect the High Line from near the Hudson Yards development to the new Moynihan Train Hall, designed as part of the expansion to Penn Station by SOM that opened last week.

Once complete, the walkway would allow pedestrians to connect straight from the parkway to the station concourse without having to cross busy roads.

A second extension to the High Line could also be built around the corner past the Javits Convention Center, to bring the pedestrian bridge down to meet Pier 76.

Walkway could connect to waterfront park

Pier 76 is currently a tow pound, where the New York Police Department keeps vehicles it confiscates for being parked illegally.

Governor Cuomo has plans to shut it down and turn the area into a waterfront park on the Hudson River. 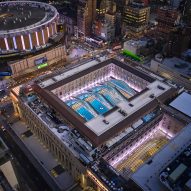 "This will be the most ambitious redevelopment that New York City has seen in decades," Governor Cuomo said.

"When the private sector economy lags, state governments build infrastructure and spur development," he added. "This connection is part of a district-wide redevelopment of the West Side that will jumpstart the private market in a post-Covid world."

The development in the area is funded by a mixture of private and public entities, including real estate firm Brookfield Property Group. The extension to the High Line will be part of Brookfield's Manhattan West development.

Non-profit group Friends of the Highline oversaw the conversion of the High Line.

The redevelopment of the area next door known as Hudson's Yard includes an 11-storey building full of high-end condos designed by Zaha Hadid Architects, Studio Gang's Solar Carve Tower, and a controversial structure of interlocking stairways designed by Thomas Heatherwick.

The High Line was closed for four months last year due to the coronavirus pandemic, reopening in July 2020 with timed entry tickets and green markers created by graphic designer Paula Scher to encourage social distancing.