Located in a former garage space at the base of a residential block, this school for music in the Spanish city of Burgos makes a feature of the building's existing concrete structure.

Local architect Enrique Jerez and interior designer Blanca Leal were commissioned to create the Yoglar school by a client, who wanted to create a "home" for early music and piano education.

The original trapezoidal plot in which the school is located was built in 1947 along with the adjacent residential building.

The garage faces the street while an extension with a mezzanine, which was added in 1952 to increase storage space, is located at the back. Supported by pillars, this features a barrel-vaulted concrete ceiling and covers the building's original courtyard.

Instead of dismantling this "disorganised" structure, the architects decided to leave the irregular, concrete shell almost untouched.

As such, the 205-square-metre school is divided into two areas. The original, trapezoidal garage space is home to an entrance hall, reception desk and toilets alongside a manager's office and the school's largest classroom.

The former courtyard area is now nicknamed "the forest" and houses two irregularly-shaped classrooms. One of these is enclosed within a house-shaped volume, which was sound-proofed with the help of three-centimetre-thick cork panels.

The second classroom is located within the larger open-plan space and is delineated by its orange vinyl flooring.

A spiral staircase made from blackened steel leads up to the mezzanine level, which has retained its original function as a storage space.

Natural light is funnelled into the school through two sets of glass doors at the back of the space that open onto a small patio.

The floors, walls and ceilings throughout are finished in polished concrete to bring a cohesive feel to the different spaces while enhancing the acoustics. 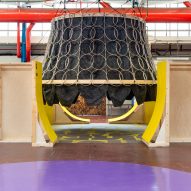 "Our aim was to design a place both unique and functional, which could foster children's creativity while achieving clear results in their music development from zero to 12 years," said Jerez and Leal.

In the Czech Republic, architecture studios FUUZE and Public Atelier recently converted a series of old church buildings into a modern primary school with the help of brightly coloured interventions.

The project involved building new classrooms and restoring the decaying roof trusses of the original church complex back to its former glory.

Images are courtesy of Javier Bravo.