Architecture studio Abin Design Studio has built a small, multifunctional community centre in the city of Bansberia in the Indian state of West Bengal.

Informed by terracotta temples found in West Bengal, the two-storey centre is designed to provide a variety of flexible spaces for the local community in Bansberia along with a dormitory for staff.

Abin Design Studio designed the community centre for the owner of the nearby Wall House, who also commissioned the studio to create a latticed concrete and glass temple.

The owner wanted to build a garage but was convinced by Abin Design Studio founder Abin Chaudhuri, who is local to the area, to initially make a facility for the community on the upper floor. As work progressed he agreed to give the majority of the building over to community functions.

"My client was looking for a garage and dormitory for staff, and after he procured this piece of land he asked me to design it," Chaudhuri told Dezeen.

The concrete-framed building is clad with exposed-brick masonry walls inlaid with ceramic blocks that were rejected by their manufacturer and terracotta bricks that were produced locally. 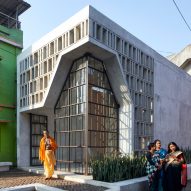 Abin Design Studio collaborated with ceramic designer Partha Dasgupta to create the varied facade finishes that were informed by a local terracotta temple.

"The 200-year-old terracotta temple of Ananta Basudeva is one of the best treasures in Bansberia," explained Chaudhuri.

"It is an absolutely brilliant piece of burnt-brick work including mythological stories that we have been fascinated with since childhood," he continued. "This facade is a tribute to that treasure and legacy."

An open stair, which was designed to help build a connection to the street, leads to the first-floor community room and the building's roof terraces.

"The steps at the front of the centre were a demand of the locals to be a gallery for viewing the celebration of multiple processions and local festivals – for which the area is famous," explained Chaudhuri.

The first floor also contains the staff dormitories, toilets and bathroom and a small kitchen.

Below this, the majority of the building's ground floor is occupied by a large community hall in a space that is accessed from the street and was originally designed as the garage.

Abin Design Studio is a Kolkata-based architecture studio that was established by Chaudhuri in 2005. The studio previous designed a concrete Hindu temple that was showcased in a film by architectural photographer Edmund Sumner.