Dezeen promotion: facade manufacturer Equitone is holding a competition to celebrate the launch of the new dark grey colour for its Tectiva material collection.

Called Graphite, the lead-grey cladding board was named after the carbon mineral by the architects who collaborated with Equitone to create the Tectiva range.

In celebration, Equitone is offering a chance to win a pencil drawing by the artist Paul Cadden, who creates hyper-realistic artworks. The prize is a commission for a drawing by Cadden, worth £10,000.

"Paul Cadden is a renowned Scottish artist famous for his hyper-realistic graphite artworks. One of his most famous commissions was for the New York Times with a reimagining of the Cartier building," said Equitone.

"The lucky winner will have a building of their choice drawn by Paul Cadden in graphite. What better way to show off your hard work than with a Paul Cadden original?"

To enter the competition to win a Paul Cadden original commission worth £10,000, architects simply have to order a sample of the new Tectiva Graphite cladding.

Graphite is one of nine colours that Tectiva is now available in, along with other natural shades such as Linen, Hessian and Calico. 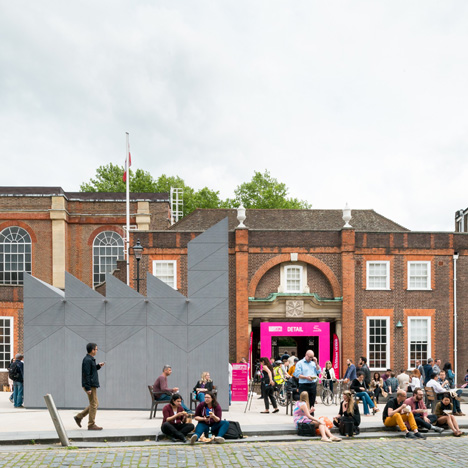 "Even before its official launch in January 2021, we received a lot of interest for this dark grey colour," said Equitone "It feeds into current trends of using dark colours; dark grey and black, as neutral tones."

The fibre cement boards have a matte finish with fine lines sanded into the surface.

As well as offering an aesthetic choice, Equitone's Tectiva cladding has attained A2-S1, d0 fire rating, the highest A2 classification, and is certified for buildings over 18 metres tall in England and above 11 metres in Scotland.

In 2014, Studio Weave used Equitone panels to create a particular textured effect on the side of a pavilion for hosting craft workshops at Clerkenwell Design Week.

This article was written by Dezeen for Equitone as part of a partnership. Find out more about Dezeen partnership content here.