Bowen Island House is tucked away on a secluded site along the northern coast of the island, which is characterised by lush forest and a bountiful undergrowth of ferns.

Office of McFarlane Biggar Architects + Designers created a contemporary twist on a cabin in the woods, in line with the client's wishes to "remain only steps away from untamed nature and outdoor adventures".

"The principle aim of the house is to complement their busy city lives with a place for quiet family living tempered by the lessons and wonder that nature offers," project leader Steve McFarlane explained.

Emphasising its cabin-like appearance, the low-rise house exists on only two levels. Its upper level is clad in local cedar and insulated glass.

"The house is stacked to preserve the natural landscape of the eight-acre site and to enhance the views of the intimate flora and the ever-changing presence of ocean, mountains, and sky," McFarlane told Dezeen.

Bowen Island House is specifically designed not to impose on its surroundings, positioned perpendicular to the rocky, lichen-covered coastline on which it sits.

Office of McFarlane Biggar Architects + Designers' choice of materials ensures the house visually complements its natural backdrop. The black-stained cedar and transparency of the glass allow the house to attractively recede into the rainforest.

The property has three bedrooms and two bathrooms, as well as an open-plan kitchen, and dining and living areas.

Hemlock wood floors and ceilings add warmth to the property's interior spaces. Cast-in-place concrete walls on its lower level mediate between the forest floor on which it is built and the wood-framed upper level.

"The house is made from a palette of local materials primarily, all chosen for their inherent beauty, toughness and refinement," said McFarlane.

"Cedar, hemlock, glass and stone are deployed with the same honesty and immediacy that animates the profound beauty of this site and its extraordinary setting," he continued.

The kitchen and children's bedrooms have views of the rocky cove to the west of the house. The glazed narrow stairwell emphasises the sea view by suppressing the horizon.

"The windows are designed with minimal frames to help dematerialise the building skin and strengthen the visual connection to the surrounding seascape," explained McFarlane.

A green roof was chosen to be as absorptive as the forest floor below, punctuated by glazed roof lanterns capturing additional sunlight. 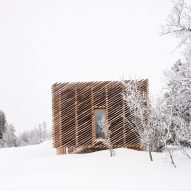 True to its cabin ideals, the remote Bowen Island House is able to operate off-grid, with its own fuel-fired generator for use during extreme weather conditions. Under normal circumstances, it is connected to the local hydro-electric power grid.

The property processes sewage using an on-site septic system. Water is provided by a private well.

Expansive decking areas on both the upper and lower level of the house provide plenty of opportunities for the occupants to spend time out of doors.

Office of McFarlane Biggar Architects + Designers was founded in 2003 by Steve McFarlane and Michelle Biggar.

More contemporary cabins include Ortraum Architects' intimate woodland cabin next to Lake Saimaa in Finland and a glass cabin by American firm Olson Kundig which has drawbridge-style shutters.