Dutch studio Zecc Architecten has designed Steel Craft House, a self-build project in Utrecht to convert an old garage into an artist's home with a Corten-steel facade.

The building, a working-class house from the early 20th century that had previously been used as a storage space, an improvised stable for a greengrocer and finally a garage, was expanded by Zecc Architecten into a home for a steel artist in the Dutch city.

The studio kept the ground-floor structure of the original building, as well as the garage door and the brick walls. It added a new two-storey timber structure on top of the ground floor and clad the facade of all three storeys in Corten steel.

While Zecc Architecten drew up the design, the client built the 95-square-metre Steel Craft House themselves with the help of craftsmen they knew. The project was completed over a period of nearly 10 years.

"A timber frame construction was chosen because of durability, flexibility and because we had to work with a light construction on the existing foundation," project architect Marnix van der Meer told Dezeen.

"The front facade is covered with Corten steel. The Corten steel refers to the expression of craftsmanship – which makes this district so beloved – and contributes to the integration, too," he added.

"The choice for Corten steel was also made out of love for this material as the client of the Steel Craft House is a steel artist in Utrecht."

The rust-coloured hue of the weathering steel, which also covers the chimney and roof dormer, picks up the red nuances of the bricks in the houses on either side.

"At first glance, it contrasts with the brick neighbouring buildings, but at the same time, it is beautifully in keeping with them because the discolouration of the Corten steel refers to the patina of the archetypical Dutch brick," Van der Meer said of the house.

Zecc Architecten and the client decided to design the building around the existing structure rather than demolishing it and replacing it with a sustainable new build.

"Reuse, preservation, and renovation of the existing building instead of demolition and rebuilding a new house was the most sustainable approach for this project," Van der Meer said.

The studio used timber for the construction of the new building, and points out that a benefit of the weathering-steel cladding is that it requires virtually no upkeep.

"The Corten steel used for the front facade has a long service life because the dense corrosion layer stops further rusting and no additional paint or coating is required," Van der Meer said. 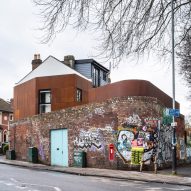 The studio kept an existing recessed front door frame for the facade to be in keeping with the neighbouring houses, but chose a glass door for the entrance.

A deep-set window creates a loggia on the first floor, while an extruding Corten steel box with a gap at the top provides privacy for the bathroom.

The house was also designed to receive as much natural light as possible.

"At ground floor level there is the front window, in the back of the house a window and a large sliding door opening to the patio, and a skylight," Van der Meer said. "The first floor has glass doors to the loggia and large tri-fold glass doors opening to the terrace."

On the second floor identical tri-fold glass doors in the rear open to a balcony, and a large skylight above the staircase as well as a skylight in the dormer let in more light.

Inside the house, the interior is formed by a sculptural piece of oak built-in furniture designed by the owner.

"Because space was limited several functions are combined in this object," Van der Meer explained.

"The stairs contain a shelving system, storage space and the base steps double as seating furniture. The harmonious interior with closed surfaces make the house appear calm and the sculptural piece of furniture saves space."

Other innovative projects in Utrecht include a care facility that is designed like a boutique hotel and the world's largest bicycle park, an underground parking space built below the Utrecht train station.

Photography is by Stijnstijl Fotografie.