Built as the entrances to a 2,700-metre-long tunnel under the Nandu River on Hainan Island in China, the bright white canopies are informed by the shape of seashells.

"Seashells were the main source of inspiration for us," said Penda China co-founder Sun Dayong.

"The canopy is not a mere replica of shellfish, we distilled the general shape out of a bivalve shellfish and instilled our creativity into beautification and detailings," he told Dezeen. "The entrance bears the hallmark of a sculptural art form."

Penda China designed a large entrance, where all six lanes of traffic enter the tunnel, on the east side of the river and a pair of smaller entrances its the west side.

All three of the canopies for the Haikou Wenming East Road Tunnel were designed with a form that curves upward to although light into the tunnel entrances.

According to the studio, the entrances' clamshell shape helps to create a transitional zone to allow drivers to adjust to the change in light conditions.

"Human eyes need time to make some adjustment as the luminance uniformity alters; if not, a probable visual deprivation would occur instantaneously but temporarily," explained Sun Dayong.

"To dispel the potential safety hazards of causing accidents, one end of the canopy is levered with moderate upwardness. The appropriate tip ushers in natural light in a continuation of luminance uniformity to minimise the detrimental discomfort."

The underside of the larger entrance has an undulating form that is also taken from the shape of seashells and recalls ripples of water. 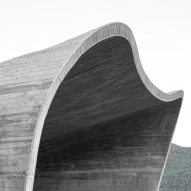 Each of the entrances is clad in glazed aluminium panels, and have an arrangement similar to that of the Nordpark Railway Stations designed by Zaha Hadid Architects.

"Morphologically, its structure shares overlapping similarities with the shells of marine molluscan animals; to be more specific, it is a sculptural entity inclusive of multiple attributes of species above-mentioned as an organic whole," explained the architect.

"Material-wise, we did get inspired by Zaha Hadid's notable works."

The shell-like forms give the tunnel a clear visual identity. Something that the architect believes was an important part of the project.

"A vehicular road tunnel, from an urban-planning view, absolutely, is perceived as a crucial component in any city," said Sun Dayong.

"As an outstanding bridge builds into the attraction of a certain city, so does a road tunnel," he continued.

"A tunnel can moreover bring forth positive enhancement to dwellers' emotion towards the city in favour of a particular sense of belonging."