Proctor & Shaw has completed an L-shaped extension with angular glazing that connects a terraced house in southwest London to its leafy garden.

The new extension replaces a leaky PVC conservatory at the rear of the terraced house. It contains a kitchen and dining area designed to fulfil the client's request for spaces with as much light and height as possible.

The project involved lowering the floor level throughout the entrance level and creating a gradually stepped transition towards a rear garden that is 1.2 metres lower.

"There's a lovely movement in this space," said the studio's co-founder Mike Shaw, "a gradual progression from the house through the new space out to the garden, articulated through stepped plateaus that give the clients distinctly separate zones despite there really being one large space."

Neighbouring extensions on either side of the site informed the design of an L-shaped addition with angular openings, used to optimise light levels whilst preventing overlooking.

The project takes its name from the triangular windows found in some older car models. Just like these cars, the Quarter Glass House features glazing that is custom-made to suit the building's specific requirements.

"The quarter glass forms came to the design naturally," added Shaw, "finding their way into the plan as we considered ways to ensure the extension was light but still considerate of the clients' and neighbours' privacy."

The four openings in the timber-framed structure include a clerestory window above the sliding doors to the garden, and a smaller window at the side that frames a view onto the garden from a wooden window seat. 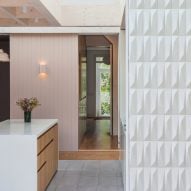 A third trapezoidal window located toward the centre of the house looks onto a new courtyard. This space functions as a lightwell connected with a utility room that doubles as a guest WC.

The fourth opening is a triangular skylight set into the sloping corner of the extension and above deep downstand beams. This shields the interior from overlooking by the neighbouring house.

The brief for The Quarter Glass House called for warm and textural materials, so the interior combines exposed timber with muted copper surfaces and cabinetry painted a duck-egg blue.

The ceiling soffit is constructed from Douglas fir that is complemented by the copper-topped, birch ply kitchen island and the pale-pink microcement that was used as a wall finish and splashback.

Large, light grey floor tiles extend from the kitchen to the adjacent patio, creating a sense of cohesion between inside and outside.

The cabinets and drawers are from Ikea, which freed up some budget for premium details such as the kitchen island and a custom-made aluminium-framed dining table.

Proctor & Shaw was founded by Shaw and John Proctor in southwest London in 2004. It specialises in residential new-builds, refurbishments and extensions around the UK's capital.

Other London extensions completed by the firm include one with a timber-lined snug overlooking a garden and another featuring faceted tiles on both internal and external surfaces.