Madrid-based Husos Architects has designed a compact timber cabin near Madrid for one of its co-founders that aims to be sustainable and sensitive to its pine forest setting.

Named (Synanthro)Love Shack, (Tele)Working Abode, the cabin was created for Husos Architects co-founder Diego Barajas and his partner as a place for them both to live and work.

Husos Architects designed the home, which is part of a housing development in a woodland area, to have the smallest footprint for its two occupants to live comfortably while aiming to have a low impact on the pine forest ecosystem.

"We understand this project as an ensemble of architecture for human and non-human animals, that together form a path towards exploring ways of caring for the biological and social diversity of an urban forest ecosystem that include realities that are often undervalued and neglected," Barajas told Dezeen.

"That is the case of moths, gay families, migrant domesticities, or some of the construction challenges of architecture regarding the current climate emergency," he continued.

The project aims to both radically reduce the ecological footprint of suburban housing and imagine other forms of coexistence with the surrounding fauna.

To reduce the Love Shack's environmental impact Husos Architects reduced its size by designing multifunctional rooms and furniture, and taking advantage of both indoor and outdoor spaces.

"We designed the house to be transformed to encompass the various different uses of a larger house within a relatively small footing," explained Barajas.

"First, we did that by rethinking domestic spaces such as the bedroom or the roof, parts of the home space often underused; second, by multiplying its uses by means of designing a few easily transformable furniture pieces; and third, allowing for domestic life to occur within varying degrees of interiority and exteriority."

The house has two main living spaces divided by a bathroom topped with the main sleeping space, which is accessed by an inbuilt ladder and opens onto the kitchen.

Described by the studio as the "heart of the cabin", this four-metre-high kitchen contains a seating area and is connected to an outdoor terrace that is enclosed in a metal cage.

A second, multifunctional room can be used as an office, gym, dining room or guest bedroom, and is flanked by a mirror-fronted wardrobe. It has a collapsable table that can be hung on the wall when not in use and a sideboard that contains a foldable bed.

All of the interior spaces were panelled with oriented strand board (OSB).

With sustainability in mind, the cabin was constructed from a prefabricated solid pinewood structure sourced from responsibly-managed forests in Soria, about 250 kilometres from the site. 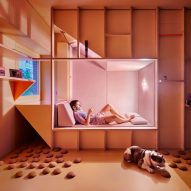 It is topped with a roof terrace described by the studio as an "open-air living room", which is wrapped in a chain-metal fence decorated with small pieces of purple-painted timber.

"The house recreates imaginary fragments of the South American landscape through the lilac and purple tones reminiscent of the Jacaranda mimosifolia, which – like us – originates in those landscapes, bringing them into dialogue with those of the Western Sierra of Madrid," explained Barajas.

"The perforated upper floor facade painted in those tones offers intimacy, and at the same time representation for our non-heteronormative, transnational family."

Throughout the project Husos Architects aimed to integrate the building into the woodland setting, adding a series of bird feeders, nesting boxes and water fountains for birds.

"Our approach to the natural environment has been through a socio-bioclimatic cabin as well as other, small animal architectures for birds and bats that feed on a defining agent in this ecosystem: the pine processionary moth," said Barajas.

Barajas said the project aims to demonstrate the studio's concept of 'interwoven architecture'.

" For us, this project is an exploration of designing according to a concept we have been working with for years, namely, 'interwoven architecture', based in Latin-American decolonial feminist thinking, in which environmental and social issues are understood together," he explained.

"If we look at the history of the colonisation of the biosphere, we can see that the violence against nature and other species has often been accompanied by other forms of violence towards our own species, towards racialised people, women, non-heteronormative bodies and others," he continued.

"It is not only about inclusion of different forms of existence; but also, about the search for other, less painful, more pleasant ways of living."

Husos Architects, which was founded in 2003 by Barajas and Camilo Garcia, is based in Madrid and operates between Spain and Colombia. The studio has previously designed a plywood-lined apartment for a young doctor and his pet bulldog and added a plant-filled "bathyard" to apartments in Madrid.

Photography is by Luis Díaz Díaz unless stated.