David Adjaye, SO-IL and BlackSpace Urbanist Collective were among the speakers who presented in the final part of The World Around summit, which was broadcast live on Dezeen. Watch the event above.

The session spotlighted designers, thinkers and artists who are grappling with some of the complex issues currently playing out in the US, including the nation's response to the coronavirus pandemic and race relations.

"Together [the speakers] explore how people can expand our understanding of this complex and divided country through positive, productive ideas and reclamation of civic spaces," said The World Around founder and curator Beatrice Galilee.

BlackSpace is an interdisciplinary collective of urban planners, architects and designers that work to bridge policy, people and place to promote equity and justice in the built environment.

The organisation spoke about BlackSpace Manifesto, which was created as a guide for their work as urbanists working in and with communities.

Activist-architect Deanna Van Buren spoke about the work of non-profit organisation Designing Justice + Designing Spaces, which investigates and reimagines the criminal justice system from a financial and racial standpoint. 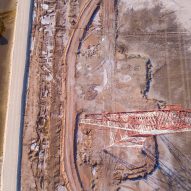 Panelists discussed land in part two of The World Around summit

Wide Awakes, an initiative by artist-led organisation For Freedoms, spoke about its campaign for greater visibility for civic justice and voting rights both within and outside of America.

The World Around is an online non-profit organisation that works to bring together global perspectives on some of the most prominent issues of our time.

The summit marked the beginning of The World Around's year-long residency at the Guggenheim museum.