Chicago studio Kwong Von Glinow has built Ardmore House to prove it's possible to design a high-quality home for a standard city lot.

Studio founders Lap Chi Kwong and Alison Von Glinow acted as both architects and developers for this project, their first built work since founding their studio in 2017.

Located on a standard residential plot in Edgewater, north Chicago, the house has a simple, vernacular form, with a rectangular footprint and a standard pitched roof.

However, inside the building feels modern and spacious thanks to a curved, double-height atrium and light-filled, open-plan living spaces.

Kwong and Von Glinow, who were awarded the New York Architectural League Prize for Young Architects in 2018, wanted to offer an alternative to the standard houses being built by developers in the city.

"Chicago is saturated with many standard developer-driven housing projects that are fuelled by real-estate market demand, profit, and little else," the pair told Dezeen. 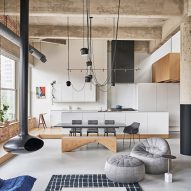 "In Ardmore House, we designed the home with values rather than checklist criteria," they continued. "We considered what the future of housing could be, and what kind of values the architecture of the home could bring to how the future residents would live."

Key to the design is an upside-down layout, placing bedrooms on the ground floor and living spaces upstairs. There's also a partially sunken basement level that is able to accommodate flexible uses.

This arrangement made it possible to create a highly open interior, where the upper level feels more like a mezzanine. This floor is completely open-plan, divided only by the triangular roof trusses overhead.

"The upside-down layout is the obvious choice for a house along an alley, to give privacy for the dweller," said Kwong and Von Glinow.

"This sectional flip allows more light and a more generous ceiling height," they explained. "The goal is to optimise the space where the residents will spend most of their time to the maximum potential. This means bringing in light and air to create a healthy living environment."

The structure of the house is relatively simple, built using standard materials. The base is concrete, while the upper levels are clad in an Accoya wood facade system in two different shades.

Like many American homes, the house has a wood-frame construction. But instead of taking a typical approach, Kwong and Von Glinow chose to use a balloon frame – a system that was first developed in Chicago.

With this method, wooden members span the full height of the building, supported by the four trusses that frame the roof.

These trusses are clad in oak tongue-and-groove boards, allowing them to become a solid presence within the living spaces.

"Since the upper level living spaces are open to one another, we use the trusses to define each of the spaces below: living room, powder room, dining room, kitchen island and the kitchen," said the architects.

Three bedrooms are located on the ground floor, with bathrooms slotted in between. They are accessed via the curved atrium, which is also where the staircase is situated.

This double-height space was designed in this way to make it more functional than a standard corridor would be.

"For a lot of our projects, our priority is how can we minimise or eliminate hallways and corridors," said the architects. "In most cases they do not add spatial value besides providing a means of circulation from point A to point B."

"In Ardmore House, the curved atrium acts as an interior courtyard that allows circulation to each of the bedrooms, but also becomes a space itself," they added, suggesting it could be used as a space for reading a book, or for children to play.

This space is flanked by a high-level window with a width of 56 feet (17 metres ), as well a square picture window below. This ensures that both the ground and first floors are flooded with natural light.

A similar level of care is given to windows in other rooms too. The kitchen window lines up with the position of the worktop, while the bedroom windows are positioned with privacy in mind, either facing towards a brick wall or to a secluded rear courtyard.