Our latest Dezeen x MINI Living video investigates a modular building system based on the shapes of dining tables, designed to help tackle loneliness in cities.

Table Top Apartments, designed by Chicago-based architecture studio Kwong Von Glinow, is a conceptual system for constructing residential buildings on footprints as small as eight by 30 metres – the typical size of a lot in New York.

The scheme, which was awarded first place in a competition seeking affordable housing solutions for New York, is notable for its unusual "post and slab" structure, based on the form of tables stacked on top of each other.

Each apartment unit is based around a uniform set of four supporting posts. On top of these sits the slab element, which comes in one of three shapes.

Alison Von Glinow, who co-founded Kwong Von Glinow with Lap Chi Kwong, said the unique character of the proposal comes from the way in which the different slabs can be combined to create formally diverse structures.

"The way in which the three different slab shapes come together can make about 25 different combinations of what the slab actually looks like," she explained.

"The units never come together perfectly and that's done on purpose," she continued. "This brings in light and air between the slabs, and down into the units within the building."

This project was designed with New York in mind. It is designed to fit on the city's smallest lot sizes, although it could also be scaled up to form what the architects describe as "superblocks".

The architects believe it could provide high-density housing that offers its inhabitants a good quality of life.

"We're working with these minimum dimensions to house as many people as possible, but also as comfortably as possible by allowing the shared spaces to give some breathability to the building," Von Glinow said.

The uneven spaces between units created by the irregular shapes of the connecting slabs would form communal areas and create internal views between homes, allowing for a sense of community to develop between residents. 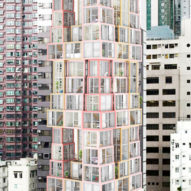 "There's something really important about feeling part of a community, feeling engaged with where you're living, and knowing your neighbours," Von Glinow explained. "It can make for a healthier, happier lifestyle."

"This is a way to help alleviate the social isolation that people are becoming more and more prone to in cities," she claims.