Kéré Architecture has released visuals of the National Assembly of Benin, which has been designed to "express the democratic values and identity" of the country.

The Benin parliament building, which is set to be built in the country's capital Porto-Novo, will be top-heavy to mimic the form of tree canopies by providing shade to public spaces around its edge.

It was designed by Kéré Architecture to pay homage to palaver trees – the trees used by generations of west African communities as accessible places to host public gatherings and make communal decisions.

According to the studio, the main aim of the building to "embody and express the democratic values and identity of the people of Benin".

"The Benin National Assembly marks an important next step for our studio," said the studio's founder, Francis Kéré.

"This project gives shape to our ideas about community gathering, the importance of indigenous forms of governance and what contemporary African architecture can be on a national scale," he explained.

"I am honoured by the trust that has been placed in us, and am grateful that together we can build a new house of democracy for the Republic of Benin."

The centrepiece of the National Assembly of Benin will be its main assembly hall, which will be positioned at ground level and have a ceiling of exposed structural beams that evoke tree branches.

The trunk of the palaver tree will be represented by a large central courtyard at the heart of the building, which will naturally filter ventilation and light into its interiors.

The upper levels of the building will be used for private offices and auxiliary areas, which will be set back from the building's slated facade that is designed to filter sunlight.

These spaces will be connected to the assembly hall on the ground floor via a spiral staircase in the middle of the courtyard.

The building will be topped with a roof terrace that will have uninterrupted views of the city and a distant lagoon.

Kéré Architecture will also design a park alongside the Benin parliament building that can be used by city residents as a central recreation space.

Its proximity to the government building is intended to "create a sense of openness and transparency", the studio said, as it will provide "generous shaded space where citizens can gather and deliberate, analogous to the assembly hall on the opposite side". 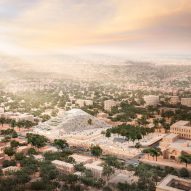 The project will be completed with a public plaza to mark the public entrance to the parliament.

Positioned to the southeast corner of the site, this will also face towards the former national assembly building where Benin declared independence from France in 1960.

Kéré Architecture was founded by Burkinabè architect Kéré in Berlin in 2005. The studio expects to begin construction on the National Assembly of Benin in March, with completion slated for 2023.

Other recent projects by the studio include the Tippet Rise Art Center pavilion in Montana, USA, which was crafted from dead trees, alongside a proposal for Burkina Faso's new parliament building, which Kéré said: "responds to needs of the people".

Visuals are courtesy of Kéré Architecture.