Diller Scofidio + Renfro and Woods Bagot have revealed visuals of the Aboriginal Art and Cultures Centre in Adelaide, which will take cues from traditional indigenous shelters.

Once complete, the 11,500-square-metre cultural centre will host a mix of exhibition and event spaces to celebrate the "past, present and future" of Australia's First Nations.

According to Diller Scofidio + Renfro and Woods Bagot, the building's entire design will also honour the traditions of indigenous Australians.

Developed together with an Aboriginal Reference Group, this includes its layered, basket-like facade that references a wurlie – a traditional temporary shelter occupied by indigenous people.

"We're thrilled to be part of this ground-breaking vision to create a place of pride that authentically honours the oldest living cultures on the planet," said Charles Renfro, partner at Diller Scofidio + Renfro.

"The Aboriginal Art and Cultures Centre will be a place for all Australians to remember ourselves, to learn the truth-telling of our past, and to re-imagine ourselves together to create new memories as a connected community," added Woods Bagot's principal, Rosina Di Maria.

"It will be a platform for developing Australian culture – informed by the past, shaped by the now, for our future," she said.

Once complete, the building will enclose 7,000 square metres of exhibition spaces in varying sizes and styles.

It will be distinguished by its shimmering facade, evoking the woven, textured materials traditionally used to create a wurlie, and rest on a glass base and slanted columns. 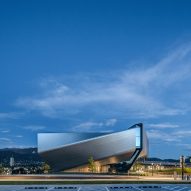 Visuals of the interiors are yet to be revealed, but according to the studios, each gallery will offer views and connections to the building's natural surroundings as a nod to Aboriginal people's deep connection to country and place.

This will include reveals in the upper galleries that frame views of the sky while also offering passersby glimpses inside.

On its lower levels, the centre will also incorporate galleries, outdoor exhibition spaces and performance areas that will be carved into the landscape.

This includes an amphitheatre designed for Welcome to Country ceremonies, which are performed by Aboriginal people to welcome visitors onto their traditional land.

The building will be complete with a flexible, three-story gathering and performance space at its heart, which will also double as a spiralling circulating space with access to each floor. 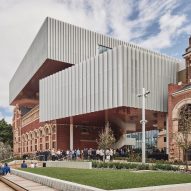 Elsewhere in Australia, Hassell and OMA also recently completed the WA Museum Boola Bardip, which celebrates the history of Western Australia, including its Aboriginal heritage.

The museum occupies a group of old buildings in Perth, which have been stitched together with protruding metal-clad structures.

In Victoria, architecture studio Edition Office collaborated with artist Yhonnie Scarce to create a cylindrical pavilion at the National Gallery of Victoria that explores the dispossession of Aboriginal people, following colonial land theft in the 18th century.